"I shall not be a mayor who puts a skyscraper in every borough," says Boris Johnson. "I want to work with Londoners." 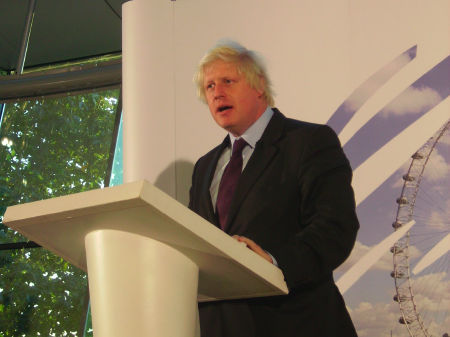 The would-be London mayoral candidate was speaking at the Conservatives' launch hustings at the Riverbank Park Plaza hotel on the Albert Embankment.

The first floor Thames Room was packed with a mainly Conservative audience to hear the four candidates in the American-style primary contest to be the official Conservative candidate for City Hall next May.

The other contestants were Victoria Borwick, Warwick Lightfoot and Andrew Boff and during the evening they all highlighted their experience as London councillors.

Victoria Borwick, who recalled her recent visit to the Salmon Centre in Bermondsey, stressed the need to cut crime and looked to New York as the example of tough action.

Warwick Lightfoot pledged to cut the Mayoral budget and unemployment whilst promising more trees and grass for the capital. Andrew Boff called for the abolition of the congestion charge and a referendum on major London issues.

The hustings took place on the same day that the Liberal Democrats announced their shortlist for the mayoral nomination. The frontrunner is former Lambeth borough police commander Brian Paddick. He is joined on the shortlist by barrister Chamali Fernando and Haringey councillor Fiyaz Mughal.

North Southwark and Bermondsey MP Simon Hughes – who was the Lib Dems' 2004 mayoral candidate – yesterday told LBC News 1152 why he's not standing this time. "I didn't even consider it," he said, explaining that his role as party president would make his candidacy "impossible".