Sir William McAlpine, chairman of the Railway Heritage Trust, visited Blackfriars Road this week to unveil a plaque marking the restoration of the facade of the former Blackfriars railway station. 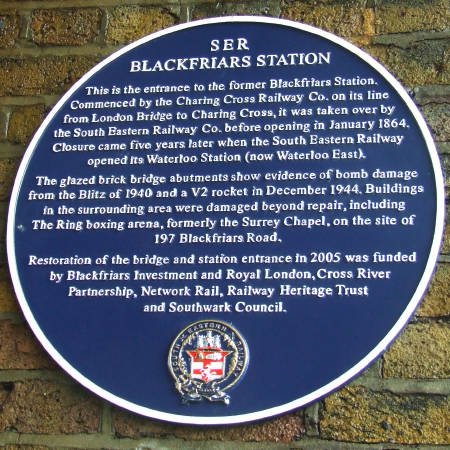 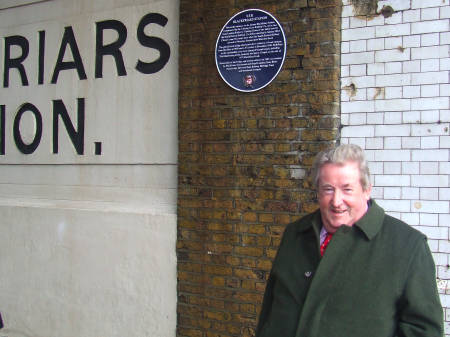 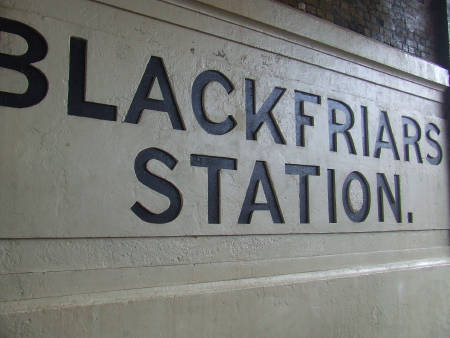 The Victorian lettering was previously obscured by advertising billboards

The bridge that carries the Waterloo East to London Bridge main line over Blackfriars Road has been cleaned up as part of the Cross River Partnership's Light at the End of the Tunnel programme.

Launched in 2004, Light at the End of the Tunnel aims to transform the 10km of railway viaduct that carves up north Southwark and north Lambeth. This includes better lighting in many of the 90 streets that pass through the railway viaduct and creating new offices, light industrial units and restaurants in previously vacant railway arches.

The work in Blackfriars Road uncovered the original facade of the South Eastern Railway's short-lived Blackfriars Station which was open to passengers between 1864 and 1869. The station's frontage has been cleaned and restored, and a plaque unveiled on Thursday explains the station's history to curious passers-by.

The former entrance to the ticket office, used by a minicab firm in the 1980s and subsequently derelict for many years, has recently been occupied by the Toast Office sandwich bar.

Sir William McAlpine told guests that his association with Southwark dates back to the 1950s when his family firm was building Bankside Power Station. He recalled coming to Bankside during his holidays to help with bricklaying at the building site.

He praised the work which has transformed a previously "scrofulous" railway bridge into a much more pleasant environment and exhorted the audience of councillors and council officials to ensure that the quality of the environment is maintained.

Sir William – a lifelong railway enthusiast – has built his own private railway on his estate in Buckinghamshire. The landscaping incorporates pieces of railway infrastructure acquired from sites his firm has worked on, including one of the London, Chatham & Dover Railway crests from the north side of the Blackfriars Railway Bridge demolished in the 1980s and part of Waterloo Station that was demolished to make way for the international terminal.