Some Kind of Bliss at Trafalgar Studios 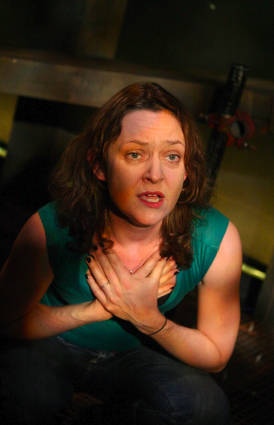 To see Some Kind of Bliss you have to go to the Trafalgar Studios in Whitehall but throughout the seventy minutes you are on the south bank.

The cast of one is the outstanding Lucy Briers who manages to be not only journalist Rachel but sometimes husband, old flame, Chinese attacker and schoolboy. The play was written for her and had its quiet premiere on the South Bank last year as a 45 minute National Theatre platform performance. This new production is longer with original material reinstated.

Rachel, being six hours too early for an assignment, walks along the river to Greenwich. Samuel Adamson, as a SE1 resident, knows the riverside well as was demonstrated in his earlier play Southwark Fair which he set outside City Hall. This time he starts at London Bridge and as always he can capture the feel of SE1.

In the new play, Rachel has to squeeze past the London Dungeon queue and avoid a hot dog man who "sells salmonella". Then she wanders around Dockhead to find a pub before encountering Dr Salter's statue complete with cat.

Rachel, a visitor returning to an old haunt, appears to linger at the Southwark end of the river which she finds better, although maybe no more law abiding, than Deptford.

The theatre's Studio 2 is very small with those in the front row sometimes feeling that they must move their feet as Rachel walks the path or searches the beach. The set is by Lucy Osborne who provides a river wall and a hint of ferry steps for the main character to run up and down as well as a versatile shoreline.

Lucy Briers has appeared in The Winter's Tale at Southwark Playhouse and Henry IV at The Old Vic. It would be appropriate for the complete Some Kind of Bliss to be at an SE1 theatre but it is well worth crossing the Golden Jubilee Bridges to catch the short run.

Some Kind of Bliss is at Trafalgar Studios, Whitehall, until Saturday 15 December.