The Memory Project is a 10-foot high cylinder with eleven cameras placed around its perimeter to create a 360-degree digital panorama of the South Bank. 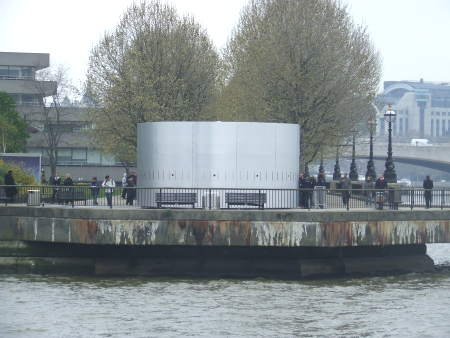 The installation has been created by Jason Bruges whose previous local work includes last summer's Wind to Light project at the Southbank Centre as well as a lighting project on London Bridge for the Switched On London festival.

The images taken by the cameras on the outside of the cylinder are displayed on screens inside the drum where visitors can move forward and back through the stored images depending how close to the screens they are standing.

Watch the tide rise and fall on the Thames and see hundreds of pedestrians scurry along the South Bank.

• The Memory Project is at the observation point on the riverside walkway near Gabriel's Wharf 10am-10pm until Sunday 20 April.