Arsema Dawit's family have alleged that the Metropolitan Police failed to take appropriate action to protect her after they reported an incident. 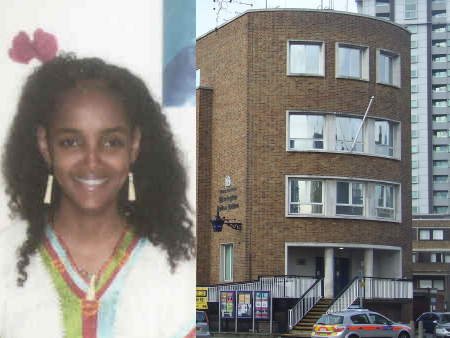 "I came to this country from Eritrea to live in safety," she said.

"When my daughter was threatened, I went to the police seeking protection. Sadly, this did not happen.

"I am absolutely devastated and cannot believe what has happened to my daughter. I feel as though a light has gone out of my life."

Now the Independent Police Complaints Commission (IPCC) has launched an inquiry into the handling of the family's reports to police.

The IPCC's investigation will be separate from the on-going inquiry into Arsema Dawit's death at Matheson Lang Gardens, Baylis Road, last Monday, which remains a matter for the Metropolitan Police.

"Our investigation will examine the circumstances surrounding the police contact with Arsema between 30 April and 2 June," says IPCC commissioner Deborah Glass.

"In particular we will look at how the police responded to an initial report made by Arsema at Kennington police station on 30 April of assault and threats to kill, and the subsequent investigation by officers from a neighbouring borough [Southwark].

"We are very aware of public concerns about the police response to reports of threats of violence, which we have investigated in previous cases. Our investigation will also examine whether there are further lessons for the police service, including whether any changes in police policy or practice would help prevent a recurrence of this type of tragedy.

"It is vital that Arsema's family, the police involved, and the public at large can have confidence that the concerns expressed will be robustly and fairly investigated.

"We will initially be working with the Metropolitan Police Directorate of Professional Standards to take over the inquiry they have already commenced. But given the overlap with the criminal investigation, we will not be able to conclude our investigation until the criminal proceedings against Nugusse are complete. We will publish our findings as soon as possible after our investigation is concluded."