St Nicholas was received with applause when he arrived at Southwark Cathedral to switch on the Christmas tree lights. 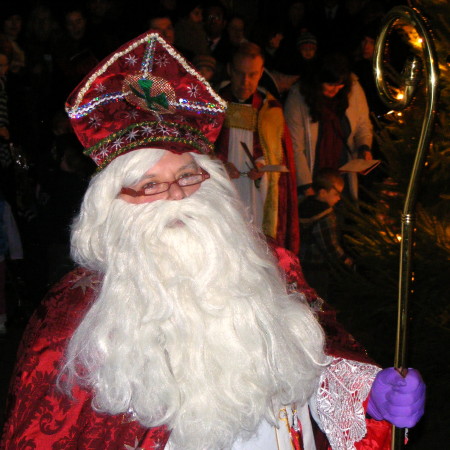 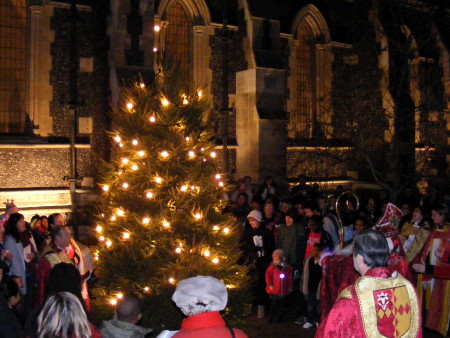 Singing carols round the Christmas tree in the cathedral churchyard

A fanfare inside the cathedral heralded the appearance the 'real Father Christmas' at the Bankside business community's service marking St Nicholas Day.

Canon Jim Rosenthal of the St Nicholas Society specialises in bringing the story of the third-century bishop alive with personal appearances at seasonal events on both sides of the Atlantic.

The packed congregation was invited to follow the bearded figure out into the churchyard for the lighting of the Christmas tree.

The Dixie Ticklers jazz band provided music for the crowd to sing Away in a manger and We wish you a Merry Christmas.

Afterwards children were able to meet St Nicholas inside as he distributed gifts assisted by two elves from the Toulmin Street-based Ministry of Fun.

During the St Nicholas Service the lessons were read by Steve Foster of Shard contractors Mace; Jo Bacon of Allies and Morrison and John Chapman of Network Rail.

The service, organised by Better Bankside and Southwark Cathedral, was the launch for the Bring a Better Christmas Campaign. Every December Better Bankside collects hundreds of gifts for distribution to vulnerable people in Bankside including the homeless, older people and children with special needs.

St Nicholas usually appears mainly in north-eastern France and Holland but this year visited Southwark before travelling to Canterbury.