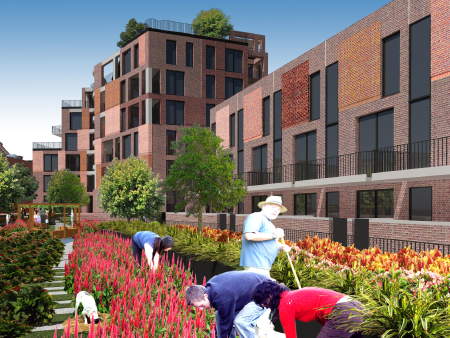 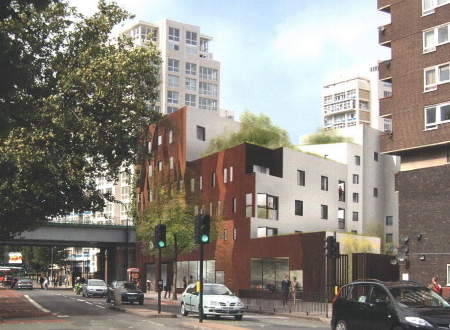 The five schemes approved last week are being developed by housing association L&Q Group as part of the so-called 'early housing programme' at 15 small sites to replace some of the 1212 homes to be lost when the Heygate Estate is demolished.

Although it was originally intended that Heygate Estate tenants would be able to move straight to the new developments, the estate is now 70 per cent empty and it is likely that demolition will be under way before any of the new homes are built.

Some Heygate tenants will exercise their 'right to return' to the Elephant & Castle area but it remains to be seen how many will want to move home twice.

Most of the homes in the new developments at the 15 sites will be for private sale (524 units) as there is currently no Government subsidy available for the affordable housing element (431 units). The council says that it has had "encouraging" feedback from the Government's new Homes & Communities Agency about extra cash to increase the affordable housing quota.

“This is a very important milestone and shows that the council's commitment to the regeneration of Elephant and Castle is as resolute as ever," says Cllr Paul Noblet, Southwark Council's executive member for regeneration.

However, the approval of the five small housing schemes coincides with news of a further delay to the council's deal with Lend Lease for the main regeneration sites including the cleared Heygate Estate land.

All five schemes are 'infill' developments which will replace existing car parks, gardens, lawns and games courts and all the planning applications attracted objections from local residents.

More controversially the development includes six townhouses for private sale to be built on the land north of Milcote Street currently occupied by Bankside Open Spaces Trust (BOST)'s Diversity Garden. The council designated the Diversity Garden land as an 'early housing' site in spite of a planning inspector's recommendation that it be retained in its present state.

Although the proposed development includes a new community garden to be managed by BOST, the charity's chairman Tim Wood spoke against the scheme at the committee meeting.

"I very much regret that we ... find ourselves as objectors," he said, explaining that BOST has been in negotiations with the Elephant & Castle regeneration team for two and a half years and that commitments previously made by the council to bring forward a planning application for a temporary home for the gardening charity at the same time as the housing scheme had not been honoured.

The council received more than 70 letters from BOST members and supporters objecting to the loss of the community garden.

The meeting heard that L&Q had last week submitted a planning application for temporary accommodation for BOST to be provided in Ayres Street close to Red Cross Garden.

The committee was addressed by Sean Silk, representing the occupiers of 42 Davidge Street, who explained that if the committee resolved to approve the scheme, his clients would have grounds to seek an injunction on the grounds of loss of daylight and sunlight.

Architect Joseph Watters of Metaphorm told the committee that his design took cues from neighbouring buildings and used a "contemporary language that expresses today's cultural context".

Cathedrals ward councillor David Noakes told the committee about his concerns about the scheme's design and layout as well as the impact on the amenity of neighbouring residents and urged that a decision be deferred or the application be refused.

The scheme was approved by five votes to one. The only dissenter was Cllr Gordon Nardell who called the design "extremely austere" and argued that it wouldn't find favour if proposed elsewhere in London. "I'm not prepared to accept that 'it's only SE1' so it's acceptable," he said.

A development of 15 flats is proposed for the playground between St George's Road and Prospect House on the Gaywood Estate.

The building has been designed by Sarah Wigglesworth Architects, the same firm responsible for the award-winning conversion of the former Charlotte Sharman School annexe into the Siobhan Davies Studios just a few yards away.

The meeting heard from Prospect House resident Louie Sieh – herself an architect – who outlined a range of concerns about the scheme including the provision of refuse storage.

The scheme was approved unaninmously by the six committee members.

S333 have designed a development of 52 flats with shops at ground level for the land on New Kent Road between the railway bridge and Albert Barnes House currently occupied by a ball court and green space.

Councillors were cautious about the dark facade of the building. Architect Jason Skinner explained that the laminate facade would fluctuate in tone and that the colour palette had been chosen for its robustness given that a lighter cladding would get dirty more quickly.

Councillors unanimously resolved to grant planning permission at 1.10am.