This week is the final opportunity to help Dickens Square receive a makeover courtesy of the Mayor of London by voting in the 'Help a London Park' scheme. 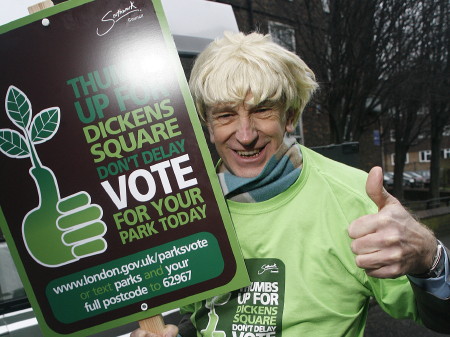 The Mayor launched the 'Help a London Park' scheme last November to make over ten of the capital's green spaces and Londoners are being given the chance to decide which ones will get a revamp.

At Dickens Square Southwark Council says that it hopes to integrate the park, adventure playground and neighbouring mosque into a vibrant green neighbourhood centre and support the value of the site as a varied inner city habitat.

Earlier this month the council staged an event in the park to encourage locals to vote. Council officers donned Boris Johnson-style wigs in a desperate bid to drum up support.

Across London more than 50,000 votes have already been cast and the Mayor is urging those who have not already done so to vote before the competition ends at 5pm on Friday 30 January.

"This is a real opportunity to have your say about which parks you feel need some help to make them cleaner, greener and more enjoyable to use, so I would urge everyone to get voting!" says Boris Johnson.

Southwark Council had planned to build 92 homes at Dickens Square as part of the Elephant & Castle 'early housing' programme linked to the redevelopment of the Heygate Estate.

The housing proposal was quashed by a planning inspector who recommended that Dickens Square should be designated as borough open land.