Drinking on the pavement outside the Fire Station bar in Waterloo has been banned. 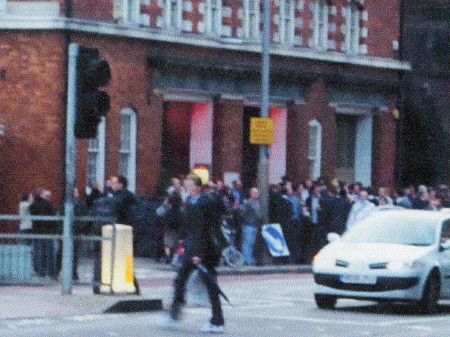 Lambeth's licensing committee, sitting at Lambeth Town Hall to review the licence of the popular Waterloo Road wine bar, found that there had been been several breaches of the existing licence.

Mike Tuppen, who said that he had lived in Waterloo for 43 years and claimed to represent 300 residents, presented evidence of the pavement outside the wine bar being blocked on several occasions in 2007 and 2008 and pedestrians being forced to walk in the road. The committee viewed a video shot on Tuesday 4 September by Mr Tuppen.

Mr Tuppen, of the Octavia Hills Residents' Association, submitted an application for a review of the premises licence last October.

Another witness, Tony Mills, a local resident for 71 years and leader of a local Scout group, said that he had been forced to walk in the road when escorting groups of young people. Cllr Peter Truesdale also gave evidence.

Michelle Hazelwood, solicitor from John Gaunt & Partners representing owner Marston's, submitted that the issue before the committee was a highways matter. She said that that thousands of people pass the door every day but only two objections had been received. There was no breach in the conditions of the licence.

"This premises attracts a mature professional customer base," claimed Ms Hazelwood. She pointed out that a separate licence for use of a strip of pavement was renewed every March by the highway authority.

After hearing evidence for more than an hour the panel of three councillors withdrew for 23 minutes deliberation.

Committee chair Cllr Sharon Malley announced that the committee had found breaches of the licence and decided to amend the licence to remove provision for off-sales of alcohol. The ruling means that alcohol purchased at the Fire Station can only be consumed within the building and not on the pavement.

Speaking outside the hearing, Marston's solicitor described the ruling as "a harsh decision".

Mike Tuppen said: "Support for the application of review has been outstanding. This has been from the South Bank Forum and Waterloo Community Development Group attendees, members of the business community, residents and those passing through Waterloo."