Bankside Open Spaces Trust and the Waterloo Green Trust have announced that they are proposing to merge. 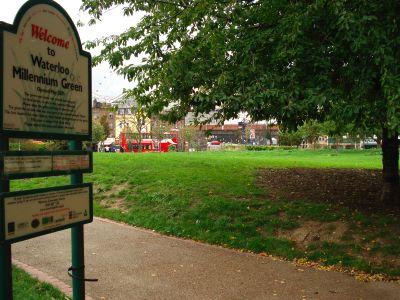 Bankside Open Spaces Trust was set up in 2000 to turn local concern for parks, gardens, the streetscape and the wider shared environment into action. It now manages a number of local gardens.

Waterloo Green Trust was established to develop and manage Waterloo Millennium Green which was the first new park in Lambeth for 20 years when it opened in 2000. In recent years WGT has struggled to attract sufficient funding to maintain the green.

"BOST and Waterloo Green Trust have known one another for some years and there is a natural fit with what we both do," explains Tim Wood, chair of BOST.

"This is a sensible and practical initiative to combine resources to protect and enhance open spaces in this part of London.

"BOST already works in partnership with a number of organisations locally and the majority of our parks and gardens are managed by local residents and interested parties through steering groups. This is a successful formula which we hope to replicate at Waterloo Green.

When the merger is completed the Waterloo Green Trust will cease to exist as an independent entity. BOST and Waterloo Millennium Green will retain their current names. Two trustees of WGT joined the trustee board of BOST at its AGM last November to help facilitate the proposed merger.

Last month representatives of both organisations addressed a meeting of Waterloo Community Development Group to allay concerns about control of the Millennium Green passing to a Southwark-based organisation.

"I would like to thank all those who have supported the trust over the years and who have helped create a place that is not just a green space in the heart of the city but also a centre for the whole community," says WGT chair Gillie Johnson.

"In thinking long and hard before deciding to close the independent trust, we were aware that our key responsibility as trustees is to ensure a sustainable future for the Green and its allied activities.

"Joining forces with BOST, which has considerable experience in managing a range of open spaces in the area, will mark a new chapter for the Green and help secure its future development."