City Hall politicians last week paid a visit to a railway arch in a Southwark back street which is home to Uptown Oil, London's only biodiesel manufacturer. 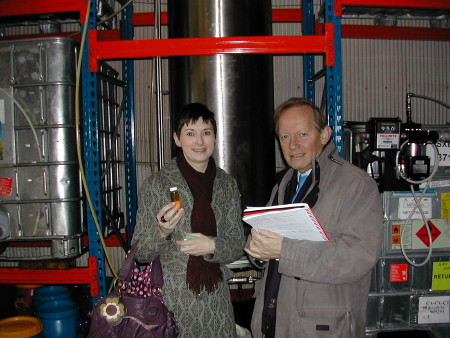 Caroline Pidgeon AM at Uptown Oil

Members of the London Assembly transport and environment committees visited the pioneering firm which is based in King James Street.

The company collects used vegetable oil from London restaurants – including many in SE1 – and processes it into 100 per cent recycled biodiesel.

Uptown Oil is London's only licensed biodiesel manufacturer and produces between 6,000 and 10,000 litres per week.

"This is a great Southwark company which is making a real difference to London's air quality," says Lib Dem Caroline Pidgeon.

"From a waste product they are creating a fuel which creates far less pollution than conventional diesel.

"The company has a licence to increase by threefold its weekly production. I hope they soon reach it and make an even greater contribution to tackling London's appalling air quality, which sees over 1,000 people die prematurely in the capital each year."

Conservative Roger Evans was also impressed: "The recovered fuel is sold, mostly to black cab drivers who usually know a good deal when they see it. Not only is it a good example of reuse, but the fuel actually burns cleaner producing fewer of the particulates that dirty our windows and irritate our lungs. A black cab running on biodiesel can pass its emission test without the need for expensive exhaust modifications.

"[Uptown Oil] estimate that the city's restaurants produce enough waste oil to fuel all London's black cabs and the bus fleet too, simultaneously cutting down carbon dioxide production and air pollution. They also employ ten people which is not to be sniffed at in these challenging times."