Tate director Sir Nicholas Serota told Southwark's planning committee on Tuesday that there is a "very high probability" that the extension of Tate Modern on Bankside will be completed by 2012. 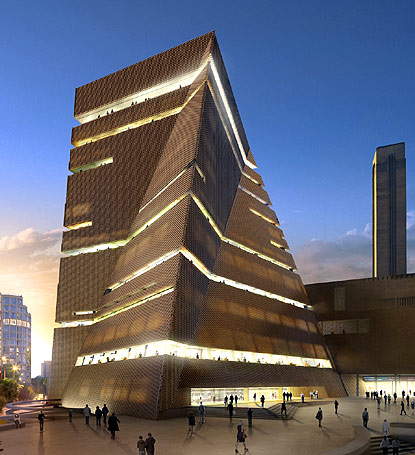 It is two years since councillors endorsed Herzog and de Meuron's proposal to append a glass pyramidal structure to the former Bankside Power Station designed by Giles Gilbert Scott.

Last summer Tate revealed a new design – clad in a brick lattice – incorporating the former power station's oil tanks which lie beneath the site of the proposed extension.

The extension will provide 60 per cent more gallery space and will ease some of the strain on the existing facilities caused by the higher than expected number of visitors drawn to Bankside since Tate Modern opened in 2000.

Sir Nicholas Serota began his presentation to the planning committee by apologising to councillors for the premature reports which appeared in The Times, the Evening Standard and Building Design suggesting that planning permission had already been granted.

Architect Ben Duckworth told the committee that the proposed lattice cladding is "like a brick veil that covers the concrete frame of the building".

Cllr Bob Skelly asked the applicants whether the abandonment of the glass building represented a "failure of nerve" – a suggestion that was rejected by Sir Nicholas.

The committee heard that the choice of brick rather than glass for the building's exterior also helped to differentiate it as a public building from the predominantly glass-clad offices at Bankside 123 and the Richard Rogers Project Bankside glass residential towers under construction in Holland Street.

Asked about the oil tanks, Sir Nicholas said: "We felt that they were such particular spaces with a given character and our experience of using the turbine hall further encouraged us to look at ways of using those tanks to give us unique spaces unlike any in any other museum in the world".

Tate says it has raised approximately one third of the cost of the building – estimated at Ł215 million at 2012 prices.

"The climate has changed," says Sir Nicholas Serota. "It's somewhat colder than it was in terms of raising funds, but we have been in very active discussion with potential lead donors at the level of Ł25 million and Ł50 million.

"We need to raise a significant additional sum ... by the end of this year in order to complete the building by 2012. I am confident that we can do that, but I can't be certain."

Sir Nicholas believes that as the Bankside Urban Forest develops, "the whole way that the building is perceived will change quite radically".

A new north-south pedestrian link across the turbine hall bridge will be open at least 12 hours every day, providing quicker access between Southwark Street and the Millennium Bridge.

"Over time the south facade will become the front facade," said Sir Nicholas, adding that in time the landscape to the north of the gallery will become its "back garden".

The scheme was unanimously approved by members of the planning committee. "We should be proud to have a building like this in Southwark," said Cllr Aubyn Graham.