Church.co.uk in Waterloo has changed its name to Oasis Church. 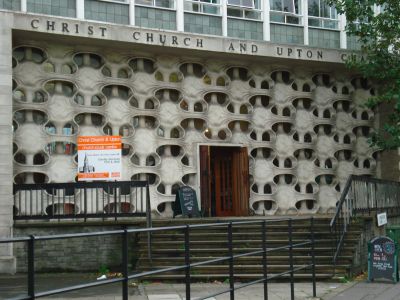 UPDATE Oasis contacted us to say that they have no plans to change the name of Church.co.uk Waterloo. This story was published in good faith based on information from Oasis themselves but we are happy to publish this clarifications

Five years ago Christ Church & Upton Chapel at the corner of Kennington Road and Westminster Bridge Road changed its name to Church.co.uk.

The church – established by well-known Baptist minister Revd Steve Chalke – found that it was being referred to as the Oasis Church by its newly planted congregations in Enfield and Salford and decided to follow suit.

"Potential partners were calling us and saying they wanted to establish 'an Oasis Church' in their area – the name stuck and became part of our vocabulary," says Wes Sutton, leader of The Oasis Church network.

"It's a natural evolution so we are just formalising it.

"When the church network launched in 2003 as Church.co.uk, its name reflected the Oasis vision of church as more than four walls and an open door on a Sunday, but a place that will deliver the Christian message 24/7, just like a website – hence the name."

"Establishing church.co.uk helped us reflect the values of Oasis in a church setting. We wanted to give an alternative to people who had been used to seeing church as a staid institution looking inward rather than out to its immediate community.

"The name church.co.uk helped reinforce that sense that we weren't going to sleep on our laurels but were alive, active and a contemporary expression of church," he added.

"The new name of the Oasis Church won't change what we do, but will tie us in a little more with the Oasis vision of making the church the hub of a community."

The Oasis Church will continue to use the church.co.uk domain name for its website.

UPDATE Oasis contacted us to say that they have no plans to change the name of Church.co.uk Waterloo. This story was published in good faith based on information from Oasis themselves but we are happy to publish this clarifications