A vision of the future of Guy’s Tower?

A radical plan to give Guy's Tower at Guy's Hospital a makeover has gone on display at the New London Architecture gallery. 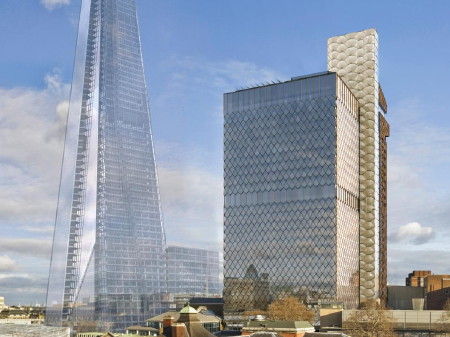 Last summer we reported that Guy's & St Thomas' NHS Foundation Trust had appointed Arup, in partnership with architects Penoyre and Prasad, to carry out a feasibility study for the external refurbishment of the 34-storey Guy's Tower.

Now an image of one of the proposals drawn up by Penoyre and Prasad has gone on display at the New London Architecture gallery in Store Street as part of a new permanent exhibition on Major London Issues.

The possible new cladding for Guy's Hospital features in the environment section of the exhibition as a desire to make the building more energy-efficient is one of the key factors in the scheme, along with a wish to spruce up the 1974 building to coincide with the arrival of the Shard, the hospital's new supertall neighbour at London Bridge.

"This is an artist's impression of one idea for the future design of the Guy's Tower, but this isn't something that will be happening in the immediate future," a trust spokesman told the London SE1 website.

"The tower is really important to patients, to the staff who work in it, and also as a London landmark. So we are considering very carefully how best to modernise and update it in future."

Standing 143 metres high, Guy's Tower is currently SE1's tallest building but will lose that distinction when the Strata tower at the Elephant & Castle reaches its full height of 147 metres. Both will be dwarfed by the Shard which will be 310 metres tall.