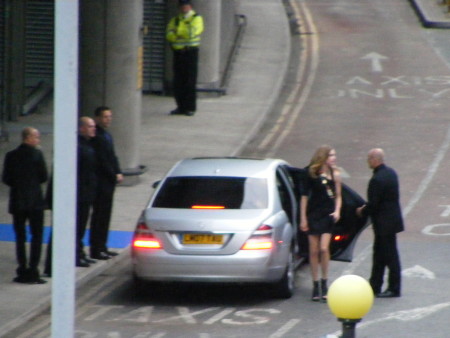 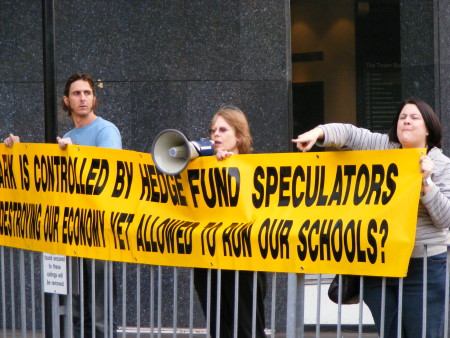 Campaigners from the Anti-Academies Alliance 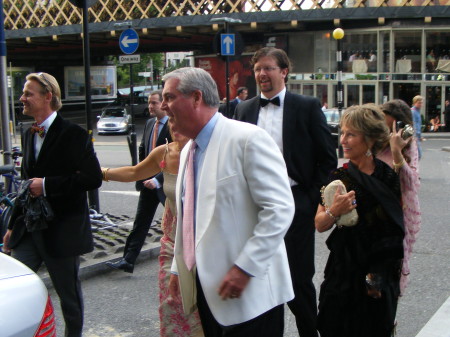 ARK (Absolute Return for Kids) was founded by financier Arpad Busson. As well as work with children in Africa and Eastern Europe, ARK sponsors a number of UK academy schools.

Last year the Geoffrey Chaucer Technology College in Harper Road was relaunched under ARK's sponsorship as the Globe Academy. The Walworth Academy in Shorncliffe Road is also backed by ARK.

Last year's ARK ball at the Old Royal Naval College in Greenwich raised more than £25 million. This year, despite the downturn, the party raised £15.6 million.

The keynote speaker at Thursday night's party was Mayor of London Boris Johnson who arrived at Waterloo by bicycle.

Carriages from the Orient Express helped to emphasise the railway theme of this year's event.

"The train theme is reflective of ARK's journey," Mr Busson told the Telegraph.

ARK's involvement with the Government's academy programme has been controversial. In December 2007 we reported how Busson was heckled when he took part in an Evening Standard debate at Tate Modern.

Activists from the Anti-Academies Alliance unfurled a banner outside Waterloo Station and harangued guests with shouts of 'shame on you'.

Government "working towards" decision on future use of ex-Eurostar terminal

Waterloo's former Eurostar terminal has been vacant for more than 18 months since the cross-channel rail service moved its London operations to St Pancras.

At the end of last year the Department for Transport spent nearly £3 million creating a new link between platforms 19 and 20 which would allow one of the five platforms underneath Nicholas Grimshaw's curving glass roof to be used by South West Trains.

Despite the building work and the installation of new signs, no public train has yet used the new plaform.

"We are currently investigating how platform 20, as well as the rest of Waterloo International, can be used to help increase capacity on the rail network and an announcement will be made in due course," a spokesman for the Department for Transport told us last month.

"We are currently working towards bringing the terminal into commercial use in conjunction with the project to reactivate the platforms."