Whitbread has confirmed that it is in talks to open a Premier Inn hotel at the corner of Great Suffolk Street and Lavington Street. 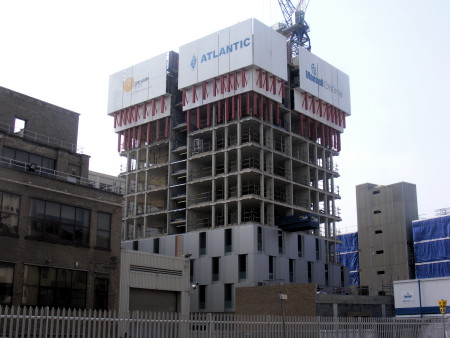 Whitbread recently submitted a licensing application to Southwark Council for the site at the corner of Great Suffolk Street and Lavington Street where a 14-storey student residence and 7-storey office building designed by local architects Allies and Morrison are under construction.

Premier Inn already has three hotels in SE1 at County Hall, Bankside and Tower Bridge Road. There are also plans for a fourth at the former General Lying-in Hospital at Waterloo.

Now Whitbread is working on proposals to open a Premier Inn budget hotel in the planned office building.

"UNITE successfully secured planning permission for a mixed use scheme in August 2008 for the corner site located on Lavington Street and Great Suffolk Street," says Richard Simpson, managing director of development at UNITE.

"The plans include 230 en-suite student bed spaces, equating to over 75 per cent of the site, as well as retail space and a 7-storey office building.

"We can confirm that we are working with a developer-partner of Premier Inn who are reviewing proposals for the office element of this site.

"UNITE are on schedule to complete the first phase of the development, delivering 230 purpose-built, professionally managed student bed spaces to the area. We look forward to welcoming our first intake of customers in September 2010."

UNITE paid Ł19.4 million for the land in 2007. The previous owner, Londonnewcastle, had bought the plot for Ł9.3 million a year earlier.

"We are working closely with our developer-partner, Jansons Properties, to develop proposals for the site, in anticipation of a planning application coming forward later in the year.

"A recent licensing application is part of this process. Development of the planning application would include local consultation as a matter of course."

Proposals for student accommodation and hotel developments in SE1 are continuing to be brought forward during the recession.

Southwark's planning committee will soon consider an application for a development of 671 student bed spaces at the Moonraker Place development at the corner of Great Suffolk Street and Pocock Street. The developers last year gained planning permission for a housing development on the same site which is no longer deemed to be viable.

Councillors have expressed concern about the proliferation of student housing and hotels in the area.