"Bankside is now one of the most attractive parts of London," says Sir David Bell. 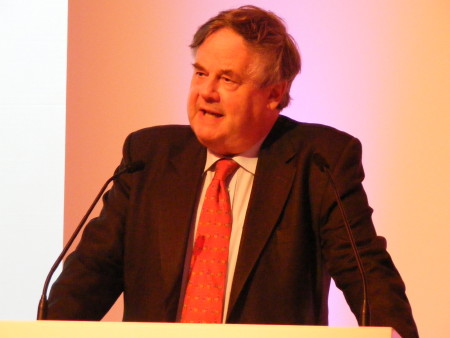 The Financial Times chairman was speaking at Better Bankside's Future Bankside 2010-2015 exhibition at Vinopolis on Wednesday.

Recalling the FT move from Bracken House in the City to Park Street on Bankside, Sir David said: "Our building was designed in the 1960s as a speculative building and only occupied by us in 1989.

"Did our staff want to come here? Absolutely one hundred per cent no."

At the time, he recalled Bankside Power Station had not become Tate Modern and was in danger of either being knocked down or turned into flats.

"There were few restaurants and very few pubs. The area was in great need of being brought back to life. And that's what happened."

"The transformation of this area is simply phenomenal."

Prompted by Dee Mair, Better Bankside board member and HR director at IPC Media, who introduced the main speaker, Sir David also spoke about his part in building the Millennium Bridge.

"My office then overlooked the Thames. I had an idea one day. Wouldn't it be wonderful to build a bridge? It was not an original idea but it had not happened. And nobody had thought of a footbridge. It required 36 different sets of planning permission.

"The importance of the bridge is not just that it is a very beautiful link but it did bring together the two sides of the river in a way that really had not happened before.

"But as far the south of the river is concerned I think the bridge has done much more.

"It has been the main entrance into the Tate and acted as a great catalyst for the development all the way along Bankside. It has become a kind of icon of modern London of which we are very very proud."

Looking to the future Sir David added: "You ain't seen nothing yet!"

Earlier, Peter Bankside chief executive Peter Williams told guests: "There is not a more exciting place in London to run a business, work or live."

Better Bankside will next year hold a ballot of local businesses to see if they want to continue the work of the business improvement district five years on from the original vote in favour of the levy on business rates.