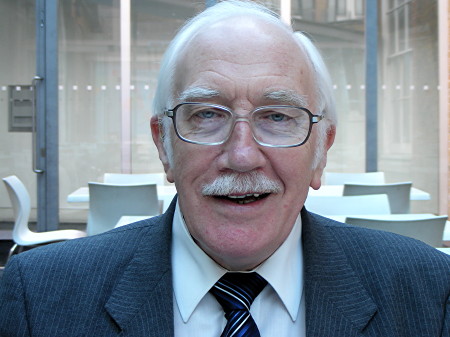 Speaking as a resident he calls the area the 'lake district of Southwark' when rain creates pools of water which he blames on poor work by council contractors.

He believes that he can win one of the three ward seats and is expecting a hung council where independents could be very powerful. He says that after a long period in power the Liberal Democrats do not enjoy as much support as in the past.

Ken Hayes is critical of the two Liberal Democrat councillors seeking reelection who he says have not been able to address local issues whilst holding executive posts at the Town Hall.

He is calling for more affordable housing and for councils to be allowed to build new homes from the proceeds of right-to-buy sales. On employment he wants more jobs for local people.

"Borough High Street is a tip," says Ken Hayes who is concerned about chain stores arriving and putting small shops and businesses in danger.

His campaign poster features a pledge to fight for the reopening of Lant Street which has been severed since the start of 2009 to allow an extension of Charles Dickens Primary School's playground.

Speaking as a trustee of a local pensioners' charity, he wants to see more help for older people who he claims sometimes still have to choose between "eat or heat" due to excessively strict housing benefit rules.

On Southwark's heritage he says: "I am amazed that the current council does nothing about promoting our history. We have more history in Southwark than most places from a Roman road to the world's first deep railway tunnel."

Ken Hayes, a former buildings manger with a City insurance company, was married in Southwark and has lived in Cathedrals ward since 1984. His three sons attended St Jude's School and the London Nautical School where he remains a governor.

As chairman of Southwark Chamber of Commerce he presided over its 75th anniversary celebrations in 1999.

He is also a vice patron of the British School of Osteopathy.