Some of the last remaining derelict warehouses in the Bankside area could be demolished to make way for a 13-storey 'boutique hotel'. 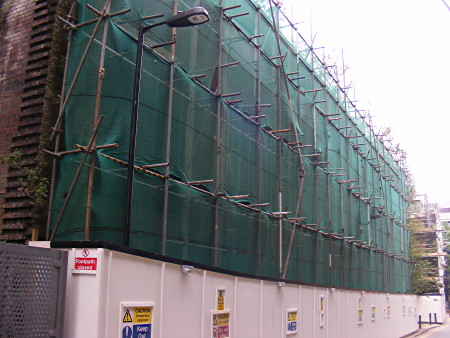 Developer Create Real Estate has submitted to Southwark Council a request for a screening opinion under the Environmental Impact Assessment regulations with regard to the Empire Warehouse and adjacent buildings between Bear Gardens and Rose Alley at Bankside.

These documents indicate that the developer is proposing a 13-storey building to include a 127-bedroom boutique hotel, 9 apartments on the upper floors and a museum on the ground and first floors.

At 50 metres, the building would be slightly shorter than Riverside House, the adjacent Ofcom headquarters building next to Southwark Bridge.

The warehouses to be demolished – if the scheme goes ahead – include the building which from 1972 to 1994 housed the Bear Gardens Museum.

The museum was the base from which Sam Wanamaker's project to build a replica of Shakespeare's Globe was run.

More recently the warehouse housed the Printspace and, later, Ritter Zamet and f a projects galleries.

An archaeological investigation at the Empire Warehouse in 2008 found the remains of 10 large dogs, horses and several bear bones, which are indicative of bear baiting taking place on Bankside.

A 'Historic Southwark' plaque on the former museum at 1 Bear Gardens recalls the Davies Amphitheatre which was visited by Samuel Pepys and John Evelyn.

The plaque also claims that Queen Elizabeth I visited the earlier bear-baiting ring to the north of the site, and that Ben Jonson's Bartholomew Fair had its first performance at the Hope Playhouse.