A Terry Farrell-designed scheme to build more than 300 private homes and accommodation for 400 NHS staff north of Archbishop's Park has been abandoned by Guy's and St Thomas' Charity. 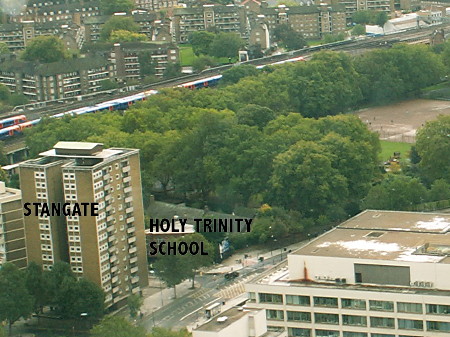 Part of the Founder's Place site seen from the London Eye 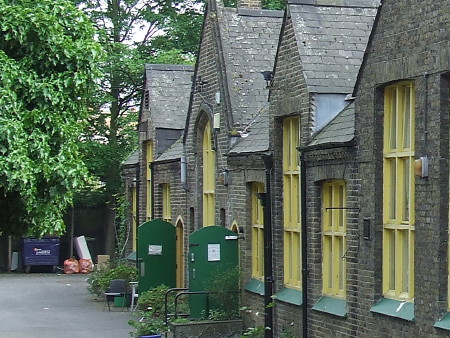 Plans to redevelop the land north and south of Royal Street, close to St Thomas' Hospital, have been on the agenda since at least 2003.

The land north of Royal Street is currently occupied by two blocks of flats called Canterbury House and Stangate. The land to the south includes the former Holy Trinity School – latterly a Tibetan Buddhist centre – and a car park where Holy Trinity Church once stood.

Lambeth Council originally rejected the Terry Farrell-designed proposals for Founder's Place in 2006 but after a public inquiry the scheme was eventually approved in 2007 by the then communities secretary Hazel Blears.

Earlier this year the Guy's and St Thomas' Charity sought to vary the planning permission to allow it to build the scheme in two phases.

Now the charity, together with Guy's and St Thomas' NHS Foundation Trust, has decided not to proceed with the development in its present form.

The scheme was designed by Farrells to provide a range of affordable and private housing and health facilities (including key worker accommodation and accommodation for families of sick children being treated at the Evelina Children's Hospital).

The charity says that it has carried out a financial and risk appraisal and confirmed that in the current and anticipated economic circumstances the business case is 'unconvincing' and planning and implementation risks remain high.

The partners will be considering alternative solutions for the relocation of the Ronald McDonald House (for the families of sick children) from its existing site near Guy's Hospital to nearer the Evelina.

The charity says that it will also consider investing in Canterbury House and Stangate, the blocks of flats occupied by long-term tenants.

"When Founder's Place was conceived it was to proceed at little cost to the charity, said Sir William Wells, chairman of Guy's and St Thomas' Charity.

"Today, the cost to the charity will be approximately Ł20 million. It is important that the charity minimises costs and maximises its return on this unique site close to St Thomas' Hospital and Waterloo Station.

"I am confident that we will be able to develop a new masterplan which meets current and future healthcare and community priorities, as well as offering a powerful business case, as soon as the market allows."

Patricia Moberly, chairman of Guy's and St Thomas' NHS Foundation Trust, added: "Whilst it is disappointing that the Founder's Place scheme will not now go ahead, we are convinced that it is the right decision to review our plans at the current time.

"In doing so, a key priority will be to identify a way to relocate facilities for the parents of sick children closer to the Evelina Children's Hospital.

"Plans for health facilities away from the main hospital site, as well as the nursery, will be picked up through our ongoing strategic planning which ensures that we meet the needs of our patients and support our staff.

"I would like to thank our many loyal supporters over the years who have helped us to develop proposals which reflected our shared interest in local regeneration; particular thanks are due to the tenants of Canterbury House and Stangate, who have lived with some uncertainty for a number of years."

One of the most vocal opponents of Founder's Place has been Vauxhall MP Kate Hoey.

"I am very pleased that the charity has discontinued its Founder's Place proposals," she told the London SE1 website.

"This was always an over-development of an historic and strategic site. I am delighted that the Victorian primary school will now not be demolished and I hope that when the charity come back in the future with a new proposal they will start by having a genuine consultation on the site with local residents.

"I am delighted too that the long term tenants of the charity will now have their homes brought up to standard and congratulate the charity and Peter Hewitt, its director, on making the right decision."

Local resident Sarah O'Connell said: "The challenge now is to get something proposed that is fitting for the site and which will be built."