A new monthly food market on the South Bank was officially opened on Friday by former newspaper editor Rosie Boycott, the Mayor of London's food champion.

Rosie Boycott at the launch event 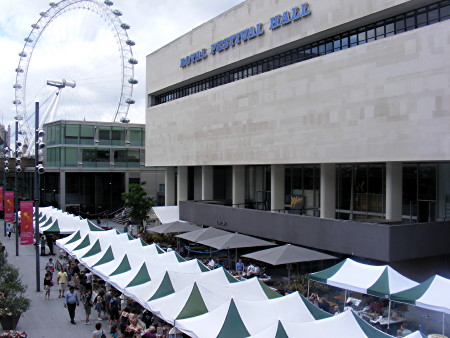 The Real Food Festival, which holds an annual event at Earls Court, is launching a year-round market on the South Bank.

The Real Food Market will be held in Southbank Centre Square (between Belvedere Road and the Royal Festival Hall) on the first weekend of every month.

The square has hosted occasional markets over the past few years, many under the Slow Food umbrella, and now the Real Food Festival is launching a regular schedule of events in the space.

"What we've created over the last few years at Earls Court has been a fantastic opportunity to bring great quality producers from over Great Britain to one place, to give them an opportunity to find markets for the produce, and to give the public an opportunity to reconnect to where their food comes from," said Philip Lowery, founder of the Real Food Festival.

"The problem with an annual festival is that it only happens once a year. What do people do for the rest of the time? So it's been an ambition of our for some time to try to create opportunities on a more regular basis."

Lowery is keen to stress that he wants the food market to be affordable: "We don't want to be too expensive here and we don't want the traders to up their prices by 20 per cent because they're in London; we want them to be selling good value food and drink which they are doing here today."

All the traders at the South Bank markets must also be exhibitors at the Earls Court event.

In late September there are plans for a Real Food Harvest Festival which will be on a larger scale than the monthly markets.

"We want to bring the Earls Court festival down to the South Bank," says Lowery – but unlike Earls Court, the harvest event will have free admission.

In an apparent dig at Borough Market, Boycott said: "It's really nice to see a market that's affordable, as opposed to some that are not far from here that are a bit unaffordable."

She stressed the importance of encouraging visitors to do their weekend shop at the market as well as purchasing food for immediate consumption, and expressed a hope that the market can become a weekly fixture.

• The next Real Food Market is on from Friday 6 to Sunday 8 August.