The Living Space internet cafe at Waterloo is to be closed down by Lambeth Council after a review of the borough's youth service. 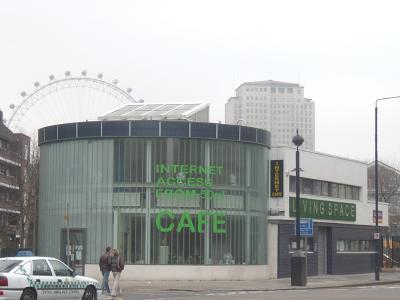 The cafe, which is run as a social enterprise under the auspices of the borough's children's and young people's services division, will close on Friday 15 October.

A notice posted on the door of the cafe says: "Lambeth has recently conducted a review and concluded that we wish to focus our resources at Living Space on providing services for young people. This has led to the decision to close the internet cafe.

"The Living Space team thank you for your custom."

The cafe, situated at the southern end of Waterloo Millennium Green, opened in 2003 to offer low-cost internet access and an affordable cafe serving fair trade products.

Internet access at Living Space is free of charge for over-50s and the long-term unemployed.

"Lambeth Council must deliver savings to meet reductions in Government funding which is why we have had no choice other than to make cuts in order to save critical services," says Cllr Pete Robbins, Lambeth's cabinet member for children and young people.

"We will explore how best to develop the space with service users and are relieved that the internet cafe is the only service at Living Space which we have been forced to discontinue."

In 2004 the Living Space won a special commendation in a competition run by Yahoo! to find the world's best internet cafe.

The building is also notable for its environmental credentials including an eco-friendly air cooling system, solar panels, sedum roof and rainwater harvesting system.

As well as the internet cafe, the building also houses a number of youth service activities which are unaffected by the closure of the cafe.

The closure of the internet cafe comes at a time that Lambeth Council is considering how it can incorporate co-operative and social enterprise principles into its services.

The chief executive of Social Enterprise London is one of the members of the borough's co-operative council citizens' commission.