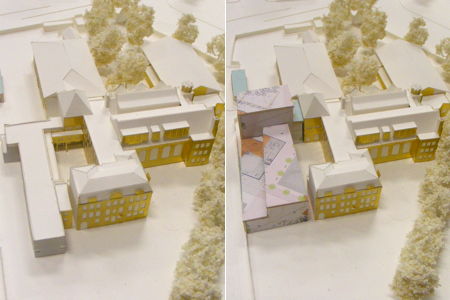 The Church of England girls' secondary school which is on a confined site alongside the Bricklayers Arms junction is benefitting from Building Schools For the Future funding.

The new building will provide teaching space and better sixth form facilities. It is hoped that new meeting and conference rooms can be of use to the local community which is being consulted at fortnightly drop-in sessions.

The existing fifty-year-old flat-roofed building opposite the shops would be demolished and temporary classrooms in the playground removed.

Drop-in consultation sessions take place at the school on Monday 11 and Monday 25 October from 6pm to 8pm.

Designs can be viewed at the school's visitors' entrance on weekdays between 9.30am and 4.30pm.

The governors hope to seek planning approval in the New Year in order that work can begin during next year's summer holiday.

Southwark's Building Schools for the Future programme escaped Michael Gove's well-publicised cuts to the scheme. Neighbouring Lambeth, where contracts had not been signed, did not fare so well.

The education secretary was last month accused of "breathtaking hypocrisy" by Southwark Council leader Peter John when he used the opening of the new Globe Academy building in Harper Road to speak about the importance of investment in new school buildings.

• Notre Dame School in St George's Road is also to benefit from an extension under the Building Schools for the Future programme. Designs are on display on noticeboards at the back of St George's Cathedral.