Val Shawcross, London Assembly Member for Lambeth and Southwark, has signed up to London Mutual Credit Union and hopes to encourage others to do the same. 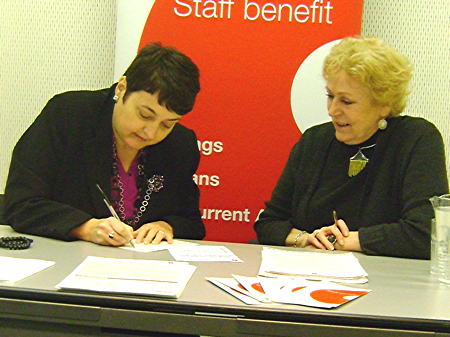 London Mutual was formed in March 2010 by the merger of Southwark Credit Union and Lambeth Savings and Credit Union.

The credit union offers a full range of financial services, including current accounts, insurance, savings accounts and a service for young savers.

It also provides access to low-cost loans, which are a much better value option than the high-interest loan companies which are appearing on high streets.

"Borrow Ł500 from a high street lender and you could end up paying up to Ł410 in interest – nearly twice what you borrowed," says Val Shawcross.

"Borrow the same amount from the credit union and you'll pay just Ł67 in interest. It's really a no-brainer! But credit unions are often perceived as only something to help out people who are struggling financially – in fact anyone can join and really should!

"It's a co-operative organisation, so the more people who join, the more the union can help people. It's also non-profit, unlike high street lenders"

Val joined up following a lunchtime presentation to Greater London Authority staff at City Hall to encourage them to use the payroll deduction facility which London Mutual offers to them.

The GLA works with London Mutual as a Southwark-based employer. Val also called on London employers to work with their local credit union to allow staff to benefit from the low cost financial services they can offer.

"I hope City Hall staff and Londoners as a whole will be encouraged to get involved – it's definitely worth the money," says Val.

Other high-profile local members of the London Mutual Credit Union include Simon Hughes MP who signed up in 2005.