On Friday more than 100 young people from the Downside Fisher Youth Club submitted their written response to Thames Water objecting to the proposed use of the Alfred Salter Playground as a work site for the Thames Tunnel project. 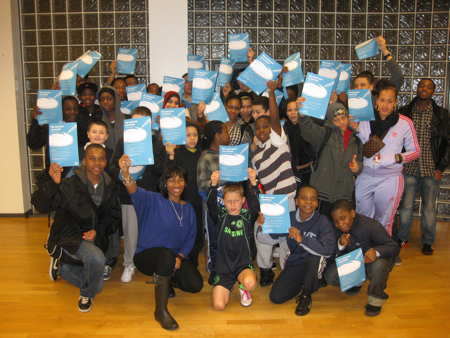 A meeting was held last November at Downside Fisher Youth Club after young people complained that they had not been consulted on the plans for the Druid Street open space. Representatives of Thames Water outlined their proposals and listened to young people's concerns.

Thames Water wants to take over the playground for at least two years while it builds a new 'super sewer' along the river to prevent sewage finding its way into the Thames itself.

"It's the only decent park in the area," says Hakim, aged 17. "If you take it away a lot of children and young people will have to travel far to play or hang out."

17-year-old Jimena said: "Without the playground young people will have nowhere to go and will get bored and are at greater risk of being influenced by crime or becoming a victim of it if roaming the streets..."

"We feel like the little people having to take on the giants who want to take away the only local play area we have," said 13-year-old Leah. "We do not have front or back gardens to our homes; this is all that we have."

Leon Bruff, aged 21, a youth worker who helped organise the consultation event and who coordinated the responses, said: "Young people are passionate and committed to this local facility; there was a lot of heated debate with some very strong arguments.

"Young people want to continue to campaign to save the Alfred Salter Playground. It has been good to work with them to help channel their energy in a positive way."

The young people have cross-party support from local politicians.

"The loss of Alfred Salter Playground would result in the loss of an important residential amenity in an area with limited access to open spaces," says Val Shawcross AM, Labour London Assembly member for Lambeth and Southwark.

"I am also extremely concerned about the potential noise nuisance and road safety hazards to the local community imposed by the use of heavy vehicles removing debris and bring up construction materials.

"I urge Thames Water to find a solution which could mean the use of this site could be avoided completely."

Southwark Lib Dem leader Cllr Anood Al-Samerai wrote in her response to Thames Water: "This is a particularly densely populated area and your proposals would cause considerable disruption to an extremely high number of nearby homes.

"Furthermore, given the density of the area, there are very few play areas and this is the best facility for young children in a very wide area.

"The Riverside Parents' & Carers' Association has considerable evidence about the need for playgrounds in this local community and this must be appreciated.

"This site is directly in front of an extremely well used youth club which has a long history in the area. The youth club has recently had huge investment and is going from strength to strength.

"To lose the playground and have a construction site in front of the club would be a devastating setback. There is also a local primary school which is strongly against the proposals.

"It is really disappointing and unacceptable that children will pay the costs of using this site."

Phil Stride from Thames Water has thanked everyone who has taken part in the first round of the consultation.

"Since the consultation began on 13 September 2010, with a mailing to 175,000 properties near potential sites and routes, we have staged 25 exhibitions and attended over 60 meetings to gather people's feedback on our initial proposals for the project," he said.

"We are very grateful to everybody who has taken the time to attend these events and submit a consultation response, including via our website.

"Your input will help us ensure the final design is the right one, providing best value for money, whilst also keeping disruption to a minimum across the capital.

"Our project team, based at Paddington, will be spending the first quarter of 2011 assessing all the responses we received in detail.

"Where possible, we will amend our plans in light of the comments we have received. This is a genuine consultation process.

"In the spring, we will publish a comprehensive consultation report, outlining our response to the comments we received during phase one of the public consultation.

"This will be followed by a further consultation period on our revised plans. This is due to start in September 2011 and will be more detailed than phase one consultation."