Developers Native Land have revealed their revised proposals for the redevelopment of the former London Fire Brigade headquarters on Albert Embankment. 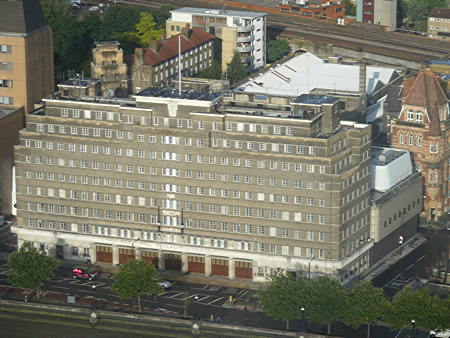 The former London Fire Brigade HQ seen from the top of Millbank Tower. 61 homes will be created in the former offices above the fire station.

The designs by Lifschutz Davidson Sandilands have been revised since the last public consultation in autumn 2009.

A planning application was submitted in January 2010 and withdrawn in April because Native Land realised they were unlikely to receive the backing of Lambeth Council.

On Friday and Saturday the developer held a third public exhibition to show off its latest proposals.

The total number of homes in the proposed development has been reduced from 360 to 293. At the same time the number of affordable homes proposed has risen from 32 units (9 per cent) to 77 units (26 per cent).

There is also more commercial space, with employment space for more than 450 jobs compared to 380 in the previous scheme.

The glass box to be added to the roof of the riverside building has been reduced to a single storey.

61 of the homes would be in the listed 1930s building, with the remainder in a series of new buildings west and east of Lambeth High Street.

The revised designs for the buildings east of Lambeth High Street are less tall than the previous scheme.

The proposals still include a new public piazza with shops at the southern end of Lambeth High Street.

Lambeth Fire Station would be retained on the ground level of the westernmost building, along with the hall of memorials to firefighters killed in London.

Plans for an infill building next to the International Maritime Organization headquarters have been cut down to a single storey, preserving views of the listed drill tower from the other side of the river at Millbank.

The London Fire and Emergency Planning Authority is expected to receive up to Ł20 million from Native Land once planning permission is granted for the redevelopment of the site.

LFEPA agreed to the sale of the building in summer 2007 as part of the relocation of London Fire Brigade's headquarters to Union Street in Southwark.