Solarcentury has been presented with its Queen's Award for Enterprise during a brief ceremony in Waterloo. 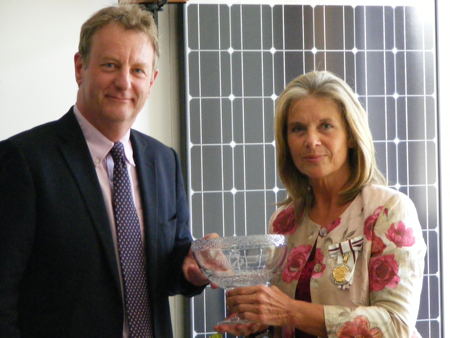 The solar energy company specialising in solar panels was one of four SE1-based firms named as award winners on the Queen's birthday in April.

Founder and executive chairman Jeremy Leggett spoke of 'the valley of death' in recalling difficult early days after setting up the company in 1998 with the aim of revolutionising the global energy market.

CEO Derry Newman outlined to guests the activities of the now profitable company which receives orders from abroad including, in last few months, Milan.

Before presenting an engraved crystal bowl for display in the building, Rosi Prescott pointed out that Solarcentury's award was made in the innovation category which is won by few other firms in the capital. She also praised the company for founding SolarAid charity which installs solar energy systems in Africa.

The Queen's Award is the company's fourteenth award in seven years.

Earlier the deputy lieutenant and Mayor of Lambeth Christiana Valcarcel climbed to the top of the building to inspect an open air display of working solar panels in appropriately bright sunshine.