The day strike by public sector workers concerned about their pensions saw a march and pickets at various locations in SE1. 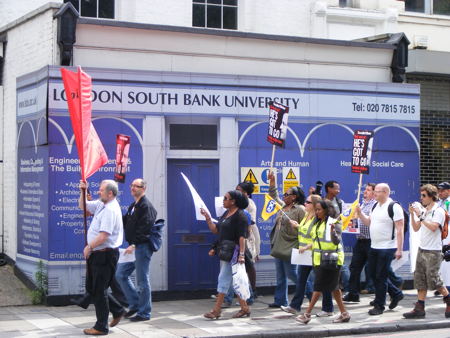 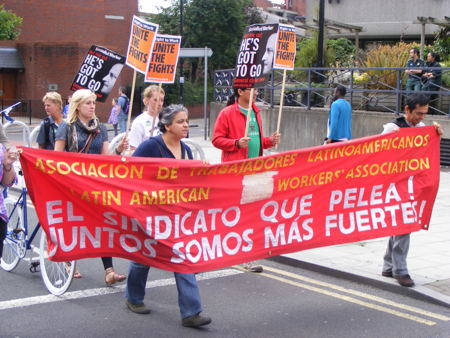 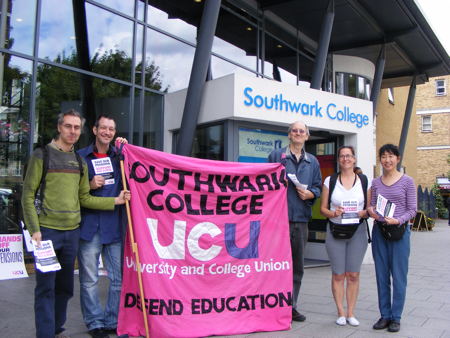 Striking lecturers from London South Bank University were joined on Thursday morning by teaching staff from elsewhere, including Kingston University, for a gathering in Ontario Street at Elephant & Castle.

More than 80 set off on a march by way of St George's Circus and Waterloo Road to join the national rally in Lincoln's Inn Fields.

There were cheers of solidarity as they passed Public & Commercial Services Union pickets outside the Department of Health's Wellington House building.

Stop your sell-offs
And pensions hikes
Then shove off
On a Boris bike.

Cameron and Clegg
You've got it wrong
Your demise
Won't be long!

Meanwhile a picket was being maintained at Southwark College's Waterloo centre in The Cut.

There was a brief strike presence outside Palestra in the morning but pickets at the Crown Prosection Service in Southwark Bridge Road and HM Revenue & Customs in Upper Ground failed to materialise.

There was also a picket line outside the Equalities and Human Rights Commission in Tooley Street.

In Lambeth Road police officers were drafted in to answer 999 calls at the Met's central communications command as the civilian call handlers were on strike.

Globe Academy remained open for some secondary school pupils but the primary school was shut. Walworth Academy was open as usual.