A police helicopter circled above SE1 for several hours on Monday night as the 27 fire engines used by private contractors during the fire brigade strike returned to their Southwark Bridge Road base. 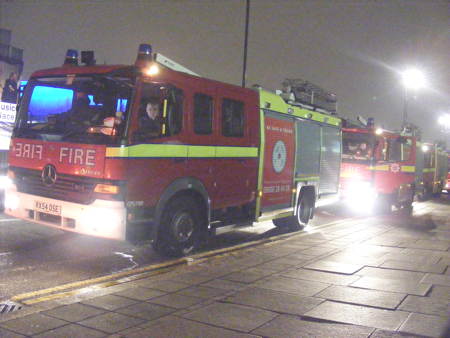 The fire engines were lined up on Waterloo Bridge where police dispatched them one by one to Southwark Bridge Road. A noisy Fire Brigades' Union picket awaited the crews employed by private firm AssetCo to provide strike-day cover.

Many of the AssetCo crews wore balaclavas as they drove into the London Fire Brigade's Southwark Training Centre.

Demonstrators outside the British School of Osteopathy clinic shouted "Shame on you!" and "Scab!" as the fire engines turned the corner from Southwark Bridge Road to Sawyer Street.

There was a heavy police presence with officers from the City of London Police deployed to support their Metropolitan Police colleagues.

Two firefighters and a police officer were injured in Southwark Bridge Road during the evening.

Monday was the second night in 10 days when residents of the Southwark Bridge Road area have had to endure noisy protests in the street.

"I apologise for the noise and the disruption," Fire Brigades' Union general secretary Matt Wrack told the London SE1 website.

He said that he hoped that local residents could understand why the industrial action was taking place.

"We're fighting for our jobs and our livelihoods now," he added. "Firefighters generally are very community oriented and do a lot for their community.

"Unfortunately now we are in a very serious battle and I would appeal to the local community to go into Southwark Fire Station and talk to the firefighters there. They will explain in more detail what it's all about."

Monday's strike ended at 6pm. Four hours later the last fire engine used by the private AssetCo crews returned to Southwark and the small group of FBU members and supporters still present gave a round of applause to the police for their handling of the situation.

The dispute is based on the threat by the London Fire and Emergency Planning Authority to dismiss every firefighter in the capital and re-employ them on new contracts if they fail to agree to changes to shift patterns.

The next strike is scheduled to coincide with Bonfire Night on Friday 5 November.