Southwark Council is planning to install electric vehicle charging points near Waterloo and London Bridge as part of the Mayor of London's 'Source London' network. 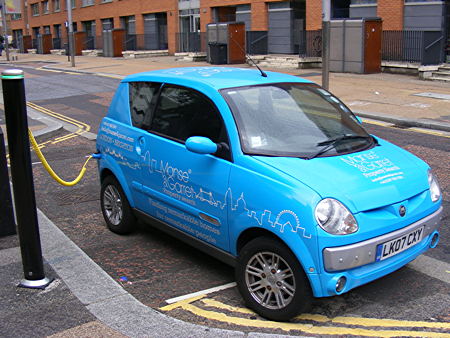 Planning permission for the Magdalen Street charging point at London Bridge has already been granted, whilst the application for a charging point on The Cut is due to be considered by Borough & Bankside Community Council next week.

Both charging points will replace existing car parking bays. In The Cut the council originally proposed to eliminate a motorcycle parking bay to create the charging point. Councillors asked officers to reconsider and the planning application has now been revised.

There are already four charging points inside the NCP car park at Snowsfields, whilst Lambeth Council last year installed special bays for electric vehicles in Upper Ground and Concert Hall Approach on the South Bank.

Demographic analysis by Transport for London has identified London Bridge, Rotherhithe and Dulwich as priority areas for the installation of charging points in the borough of Southwark.

"Given the cost of electric vehicles, uptake and therefore location of future charging points is likely to be confined to areas where ownership and use are greatest," wrote transport planner Jack Ricketts. "It is anticipated that this will remain the wards in the north and south of the borough, for the foreseeable future."

The new charging points will be part-funded by Transport for London as part of the Source London network. Southwark Council will meet the cost of electricity.