Duchess of Cornwall to go guerrilla gardening at Elephant & Castle

The Duchess of Cornwall will visit the Elephant & Castle on Tuesday to see guerrilla gardening sites at first-hand as part of a tour of urban gardens in the capital. 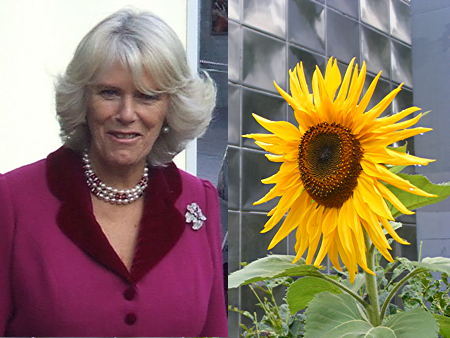 The Duchess of Cornwall on a previous visit to SE1, and a sunflower grown by guerrilla gardeners next to the Michael Faraday memorial at Elephant and Castle.

The guerrilla gardening movement is spearheaded by Elephant & Castle resident Richard Reynolds who has written the definitive book on the subject. Last year he was appointed as a 'London leader' by Mayor of London Boris Johnson.

Reynolds and like-minded volunteer gardeners have spruced up many dismal traffic islands around SE1, including the Elephant & Castle, St George's Circus and the famous lavender field near Morley College.

Guerrilla gardeners often work at night to minimise interference from council officials and the police who have often taken a dim view of their activities. Now the movement is poised to gain the royal seal of approval.

Richard Reynolds is also one of the key players in the Elephant & Castle Urban Forest campaign which is seeking to protect the dozens of mature trees on the Heygate Estate, many of which are likely to be felled when the site is redeveloped.

On the same day the Earl of Wessex will be visiting The Old Vic Tunnels underneath Waterloo Station to attend a performance by the National Youth Theatre of Great Britain. The NYT is currently staging productions of Orpheus & Eurydice and Our Days of Rage in the subterranean theatre.