The 22-year-old cyclist who was killed on Friday at the junction of Tower Bridge Road and Abbey Street has been named in the Channel Islands media as Eleanor 'Ellie' Carey from Guernsey. 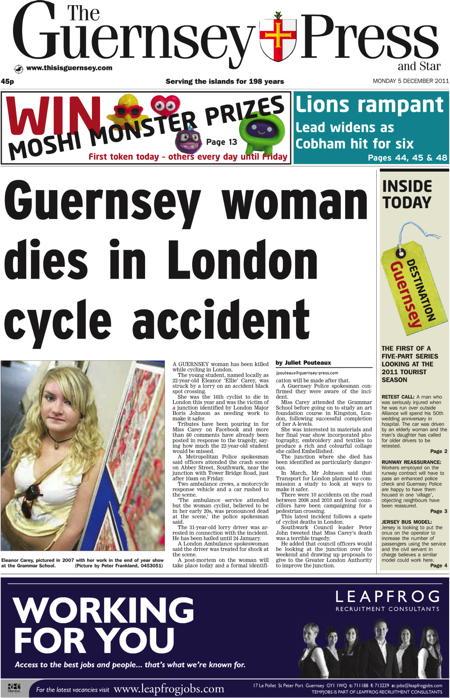 Ellie's death was the lead story in Monday's edition of The Guernsey Press & Star and has also been reported on the local television news on the Channel Islands.

"She was one of the nicest, kindest most compassionate little girls that I've ever had the pleasure to meet," Sarah Griffith from Guernsey-based charity Bridge 2 Sri Lanka told ITV's Channel Report programme.

"She had such a verve for life, she was very very considerate to other people – she was fun, she loved her music, she was just an amazing person."

Over the weekend flowers have been laid close to the scene of Friday morning's fatal collision between Ms Carey's bike and a lorry at the junction of Tower Bridge Road and Abbey Street.

On Wednesday morning the subject of cycle safety in the capital will be highlighted when the London Assembly debates a motion proposed by the Green Party's Jenny Jones AM and seconded by Labour's Val Shawcross AM.

This week's motion, which was tabled before last Friday's incident in Bermondsey, calls on the Mayor of London and Transport for London to release details of any rejected proposals for improving safety on all sections of road where London cyclists have been killed in the last three years.

Ms Shawcross, who represents the Lambeth and Southwark constituency, has previously pressed the Mayor of London to make improvements to the Bermondsey junction where Ms Carey died.

This Assembly deeply regrets the deaths of cyclists on London's road network and wishes to express its condolences for the loss felt by their relatives and friends.

We therefore call on the Mayor and Transport for London to:

• produce a list of the ten most dangerous locations for cyclists on the Transport for London Road Network (TLRN) and all locations in London where a cyclist has died in the last three years;
• report on any proposals that were put forward by cycling and road safety groups as part of official consultation processes for redesigning roads at those locations; and
• provide the reasons why any such proposals were rejected.

Wednesday's London Assembly meeting starts at 10am at City Hall and is open to the public. It will also be available live and on-demand via webcast. The cycle safety motion will be debated towards the end of the meeting.