David Mach's coat hanger crucifixion Die Harder has been installed in Southwark Cathedral. This is the first time that the work has been seen in London. 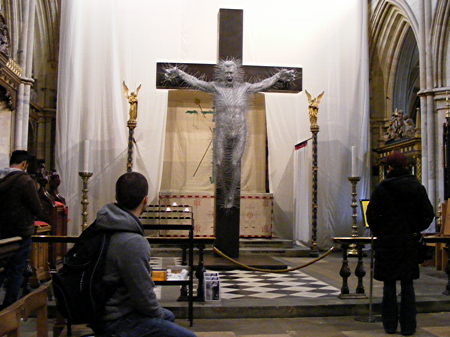 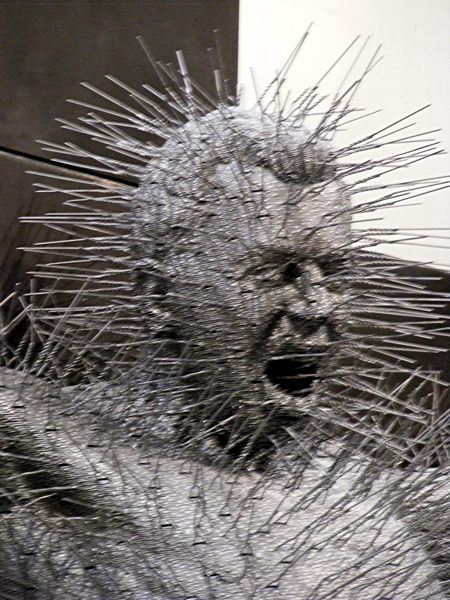 The artist used coat hangers to create the image of Christ on the cross. The sculpture has been placed at the cathedral's east end as the focus for the congregation during Lent.

The 20 foot high figure appears human size when viewed from the nave seats. Christ is seen in pain and anguish.

Speaking at the lunchtime Eucharist on Ash Wednesday, the first day of Lent, Canon Bruce Saunders told the large congregation that they might not like the sculpture and may even be offended.

Royal Academician David Mach worked on Die Harder at his south-east London studio which is in the Southwark Diocese.

Rose Harding, the cathedral's business development manager who has arranged for the work to be in the church, first saw Die Harder when it was displayed in Edinburgh last year.

This was for an exhibition marking the 400th anniversary of the King James Bible. At the time David Mach said: "I'm doing it with this unlikely, naff material because coat hangers are something you don't give a second thought to. It's getting to another audience."

At Southwark Cathedral Die Harder is being used liturgically for the first time. It has also been on show at Gloucester Cathedral but there the figure was not displayed as the sanctuary's cross during daily worship.

"The church has sanitised the cross, domesticated and made it acceptable. David Mach disturbs our cosy relationship with the death of Jesus by exposing the rawness, the pain and the horror of what we did when we killed God's son."

The Bishop of Southwark, the Rt Revd Christopher Chessun, said: "I am delighted that Southwark Cathedral has the opportunity to have this significant and challenging sculpture during Lent. It is a piece of art that evokes powerful responses and prompts important questions about the Christian faith.

"I know that people will be moved by this work as we journey towards the joy of Easter, when the suffering and death of Jesus gives way to the new life of the resurrection."

• On Saturday 25 February New Renaissance Voices presents Music to Die For, a concert of music chosen to accompany the artwork.

• David Mach is due to talk about Die Harder on Sundays 11 and 25 March at 1pm following the cathedral's 11am Choral Eucharist.