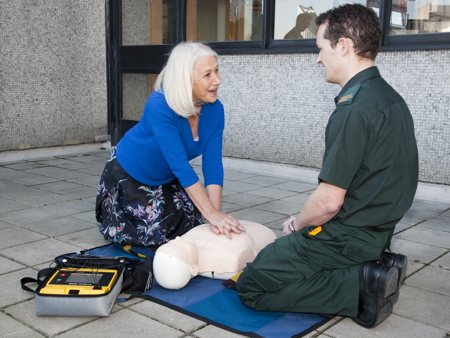 Dame Helen is the new patron of the charity supporting volunteer lifesavers in the capital.

The charity offers financial support to people responding to patients in the capital alongside London Ambulance Service.

The Oscar-winning actress became involved in the charity after one her friends Chris Worwood, 40, was resuscitated from a cardiac arrest at the premiere of her film The Debt in Mayfair last year.

Volunteer Alan 'Al' Moore, a police constable with the Met, began cardiopulmonary resuscitation while a public-access defibrillator that had been placed by the London Ambulance Service at a nearby underground station was brought to the scene.

The defibrillator was used to shock Mr Worwood's heart while the ambulance was on the way.

Dame Helen said: "It's very simple. These people saved my friend's life. In 10 or 15 minutes, he would have been dead if he had not had the fortune of Al being there. I just want more people to have this fortune."

First responders manager Chris Hartley-Sharpe said: "We already reach a majority of patients quickly, but for those whose heart has stopped beating getting lifesaving care to them immediately will give them the best chance of survival.

"All volunteer responders are trained to use a defibrillator, a device that can restart a patient's heart by delivering an electric shock. Getting a defibrillator to someone in cardiac arrest gives them the best chance of survival."

The London Ambulance Voluntary Responder Group is a registered charity which funds the work of clinically-trained volunteers responding to 999 calls alongside paid staff.

It supports community first responders who are defibrillator-trained St John Ambulance volunteers attending on call from their homes and responding to 999 calls in their own car alongside ambulances.

The group also supports the training of staff who work at busy public locations such as railway stations to use defibrillators.