The funeral of Eric James, a former precentor of Southwark Cathedral, was held in the cathedral on Friday afternoon. 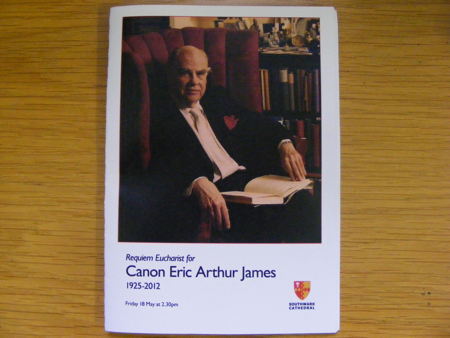 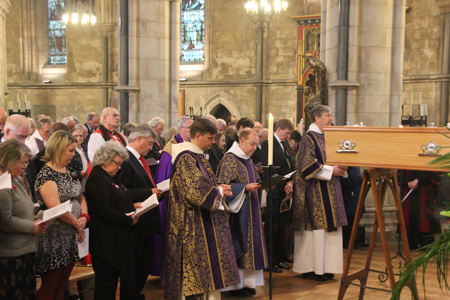 The Dean, the Very Revd Andrew Nunn, was celebrant at the Requiem and the preacher was the Revd John Lee, clergy appointments advisor for the Church of England.

The Bishop of Southwark with the Bishops of London and Salisbury were robed in the sanctuary. The Archbishop of Canterbury was also present.

Circle Works co-founder Geoffrey Court read from TS Eliot's Little Gidding and afterwards there was a retiring collection for the charity.

The service, followed by cremation, closed with the choir singing the Nunc Dimittis.

Eric James entered Southwark Cathedral for the very first time at the age of 15 when he walked across London Bridge just before 5pm one day in 1940. For a time he worked in an office within one of the nearby wharves.

He had first come to the cathedral in the hope of getting a job as an assistant organist but on being told he was too young he agreed to be an organ pupil. He also become one of the first members of the Guild of Stewards.

He was able to recall the Second World War blitz when the cathedral suddenly had a very small congregation which had for a time to worship in Guy's Chapel.

Thanks to Provost Cuthbert Bardsley, Eric was introduced to the Dean of King's College across the river and was eventually accepted for ordination.

In 1966 Eric returned to be precentor at the cathedral. He was now debating social and economic reform and encouraging the abortive Anglican-Methodist unity scheme. At the same time he was involved in supporting the riverside parishes and helping to pioneer the unique Southwark Ordination Course. Some of today's clergy can recall attending lectures at Christ Church Southwark in Blackfriars Road.

He was one of those most associated with so-called 'South Bank religion' when the cathedral and nearby parishes were first considered by friend and foe to be the most radical in the Church of England.

Whilst Director of Christian Action he triggered the Faith in the City report which was denounced by Margaret Thatcher and branded "pure Marxist theology" and "communist" by Conservative MPs.

In the end he left Southwark Cathedral because of a dispute with the flamboyant Bishop of Southwark Mervyn Stockwood.

Years later Canon James found himself called to deliver at very short notice a sensitive and relevant Radio 4 Thought for the Day on the morning after the sinking of the Marchioness in the cathedral's parish.

For most of his life, apart from appointments at Cambridge and St Albans, Eric James never lived far from Southwark. He was a curate in Pimlico (thanks to Southwark's provost), vicar in Camberwell and a resident in Kennington when a chaplain to the Queen. He died across the river at Charterhouse which has strong associations with Southwark.