Poems rain down on Jubilee Gardens from helicopter

Spectators rushed to grab bookmarks printed with poems as they were dropped from a helicopter on to the South Bank's Jubilee Gardens on Tuesday night. 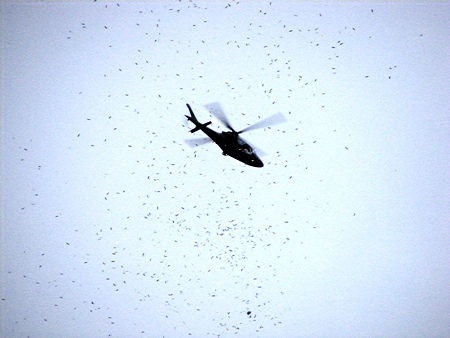 The 'Rain of Poems', devised by Chilean collective Casagrande, has been performed in six towns and cities around the world.

All the cities – Berlin, Warsaw, Guernica, Dubrovnik, Santiago de Chile and now London – have been bombed during past military confrontations. The 'Rain of Poems' is intended as a gesture of peace and remembrance.

The London event marked the launch of Southbank Centre's Poetry Parnassus, an ambitious international poetry festival held as part of the London 2012 Festival.

Belvedere Road was closed to traffic as hundreds of people surged towards the Shell Centre hoping to catch a poem as the wind carried the bookmarks in the direction of Waterloo Station.

The event was one of the first large-scale gatherings to be held in the newly relandscaped Jubilee Gardens.