Former chancellor of the exchequer Lord Lamont of Lerwick has tabled a parliamentary question in the House of Lords querying the lack of decoration at Tate Modern for the Queen's Diamond Jubilee. 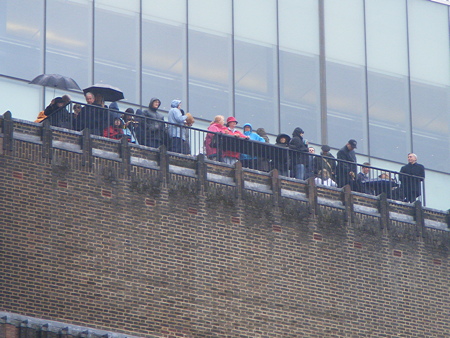 Lord Lamont asked the Government "whether they will ask Tate Modern why they failed to fly a union flag or display any recognition of the Queen's diamond jubilee on the face of their building during the jubilee celebration and the river flotilla procession".

Baroness Garden of Frognal, spokeswoman for the Department of Culture, Media and Sport in the House of Lords, replied: "Both Tate Britain and Tate Modern actively participated in the Queen's diamond jubilee celebrations.

"Tate Modern welcomed visitors, making its landscape available for a giant screen and for the BBC to park its outside broadcast vehicles. It also provided a balcony for international film crews.

"The restaurant, a private room and all the balconies were open to visitors who arrived early.

"As a result of this, hundreds of members of the public were able to take advantage of exceptional views of the river flotilla procession."

Lord Lamont might also have questioned Mayor of London Boris Johnson about the absence of jubilee adornments at City Hall.

Despite promising to consult the "bunting committee" when pressed on the GLA's jubilee plans by a Conservative colleague, the building was devoid of decorations as the Diamond Jubilee River Pageant passed by.