Patients at the Evelina London Children's Hospital can now enjoy a weekly dose of adventure at a new combined Scout and Guide unit which received its official launch this week. 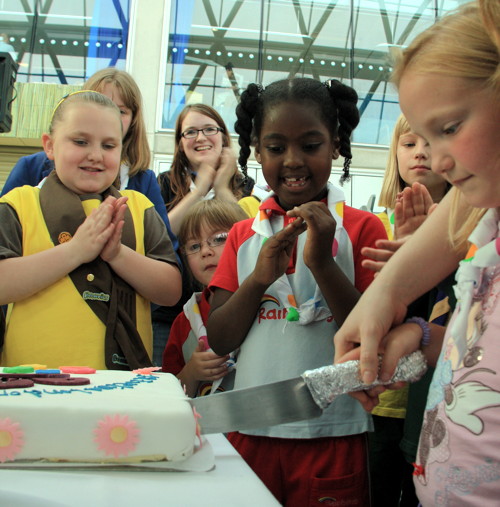 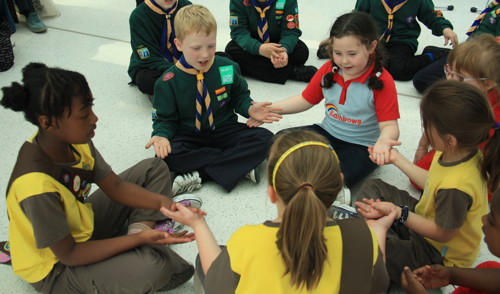 Members of a local Brownie unit and the 72nd Lambeth Cub Scout Pack – based in Waterloo – also came along to help with the celebrations.

The 1st Evelina London Children's Hospital Scout and Guide Unit is a joint venture between the Scout Association, Girlguiding, the hospital and Westminster School.

Every Monday night a team of volunteers runs a programme of games and activities for hospital patients and their siblings.

The group is open to children and young people aged six and over – whether or not they are members of Guiding and Scouting back at home – and follows a similar model to the long-established Scout and Guide group at Great Ormond Street Children's Hospital.

The idea of bringing Guiding and Scouting to the Evelina was born when members of the North Lambeth Brownies sold 1,000 chocolate brownies to spectators at the Queen's Diamond Jubilee River Pageant last summer to raise funds for the children's hospital.

The project has been spearheaded by Nicola Grinstead, deputy director of operations at Guy's and St Thomas' NHS Foundation Trust, who is also a Girlguiding volunteer.

"We are really excited about extending this opportunity to those young people who are patients in our care. We would like to thank the pupils of Westminster School who raised Ł1,054 to help towards the running of the unit."

The unit has already recruited 30 volunteers, including many hospital staff, who help out on a rota. Young volunteers from Westminster School also take the Guiding and Scouting activities to patients who are too ill to leave their ward.

Freda, aged 6, said: "Somebody asked me to come along and try Brownies and tonight I learnt the frog song." 12-year-old Alasdair added: "I was really nervous coming down but I really enjoyed it and it was really cheerful!"

Chief Guide Gill Slocombe said: "I am absolutely in awe of what has been achieved here. I know what a special, fabulous place it is. I hope it is replicated in many more places across the UK."