London's Living Room and the top-floor balcony at City Hall will only be open to a public for a single day this year, the Mayor of London has confirmed. 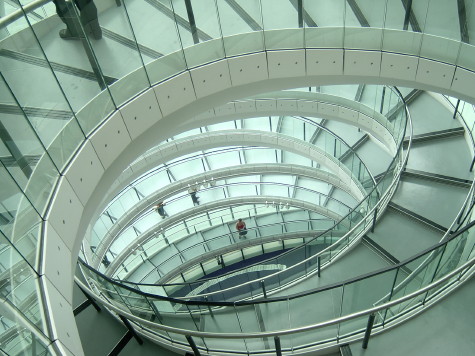 The Norman Foster-designed City Hall, which opened a decade ago this summer, originally offered 10 public open weekends a year. Although thousands of people visited the building on these open days, the weekend openings other than Open House London were discontinued by Boris Johnson in 2009 for financial reasons.

Whilst City Hall usually opens on both days of the Open House weekend, this year the only public access will be on Saturday between 9am and 6pm.

Parts of City Hall are open to the public on weekdays and there is access to the chamber for London Assembly meetings, but the top of the building is usually out of bounds.

"As the Open House London event at City Hall is mainly staffed by enthusiastic volunteers – many of whom have been working more than usual due to this summer's Olympic and Paralympic Games and surrounding events – we took the decision to open for just one day this year," said a spokeswoman for the Greater London Authority.

City Hall was completely shut to the public during the Olympics and Paralympics while the Mayor hosted 'London House' events to showcase the capital to international guests.

Winchester House opens its doors to all

One branch of the GLA family, the London Fire Brigade, will be offering unprecedented public access as part of Open House London this weekend.

The private rooms of former chief officer Captain Sir Eyre Massey Shaw at Winchester House in Southwark Bridge Road will be shown to the public for the first time at a free London Fire Brigade Museum open day.

"The open day will give people a chance to discover the story behind the grade II listed property, as well as a chance to explore the museum and learn about the brigade's rich history," says curator Jane Rugg.

"Normally, visitors can only come to the museum by joining a guided tour – the open day provides a rare chance to visit at your leisure and for free.

"Talk to the experts and see objects, uniforms and equipment from throughout the brigade's history. It's a wonderful opportunity to come down and learn more about the building and the brigade."