Transport for London has launched a public consultation on plans to introduce new cycle lanes and a 20 mph speed limit for all traffic at the BFI IMAX roundabout in Waterloo. 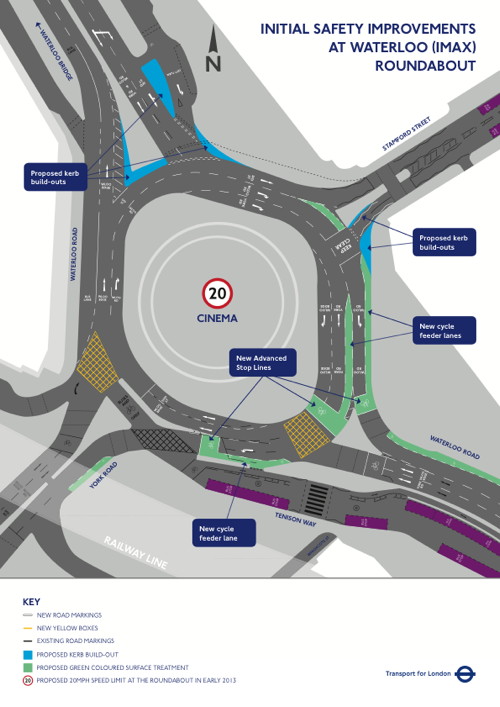 In July TfL named the roundabout as one of 100 to be reviewed with the aim of reducing the danger to cyclists.

"Our review of the current road layout identified that early improvements can be made to allow cyclists better access to advanced stop lines (ASLs) on the roundabout, reducing the need for them to position themselves amongst fast-moving traffic," says a notice on TfL's consultation website.

TfL says that "new cycle feeder lanes leading into new longer ASLs will reduce the risk of collisions by helping cyclists to get ahead of other traffic. The new feeder lanes will mean that some sections of the roundabout will have three lanes for all traffic instead of four."

There are also plans to expand pavements and traffic islands "to reduce traffic speeds and provide more space for pedestrians".

In a break with the Mayor of London's recent emphasis on 'smoothing traffic flow', the transport authority notes that "traffic modelling suggests that these changes would cause some increase in queuing on the roundabout and approaches at busy times, particularly on the approach from Stamford Street".

The public consultation on changes to the road layout continues until 14 November – but work could begin as soon as 21 November.

TfL says it will publish further details on plans for a 20 mph speed limit at the roundabout in due course.

• In a separate initiative, Southwark Council is expected to make an announcement soon about plans for a 20 mph speed limit on the roads it controls in the borough.