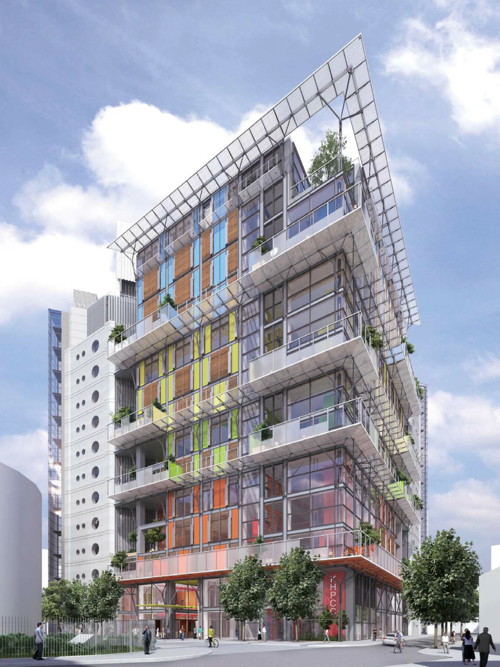 The committee voted five to one in favour of granting planning permission for the King's Health Partners Cancer Centre which will be built at the corner of Great Maze Pond and Snowsfields and is due to open in 2016.

"The building comprises 14 storeys of hospital treatment accommodation with an additional two storeys of plant on the roof," said planning officer Bridin O'Connor.

"Although described as having 14 floors, given the floor-to-ceiling heights proposed the building can be equated to about 20 storeys of residential accommodation.

"If you include the plant, that would be the equivalent of about 26 residential storeys."

She added that the building "is considered to contribute positively to the skyline and will add to a cluster of tall buildings emerging around Tower Bridge".

The committee heard from residents of Crosby Row concerned about the impact of additional traffic during construction and once the centre is open.

Russell Gray of the Bermondsey Village Action Group also argued that the environmental impact of the proposed building had not been properly considered and that the council did not have a coherent policy for tall buildings in the London Bridge area.

"One in three people will be diagnosed with cancer in their lifetime," said project director Alastair Gourlay.

"One in four people die of cancer-related diseases in our local boroughs – and the provision for cancer care in Southwark and Lambeth is not as good as it should be.

"The incidence of cancer is growing all the time. Our cancer centre is designed to meet the growing demand for cancer treatment and to raise the quality of care and the quality of research that we do at Guy's to make our hospital one of the top ten in the world."

He explained that the design, which had been developed in conjunction with patients, was intended to ensure excellence in both the "art of care" and "science of treatment".

Mr Gourlay noted that many people had questioned the inclusion of a private patients' unit in the scheme.

"The top four floors are intended to be let to a private sector provider," he said.

"When we explain that to members of the public they really understand that there's an NHS benefit in having the private sector provider."

This week the Office of Fair Trading ruled that the proposal by Guy's and St Thomas' NHS Foundation Trust to lease part of the cancer centre to Tennessee-based HCA International for 25 years did not warrant a full-scale investigation.

• The remains of a Roman boat – a scheduled ancient monument – lie beneath the site of the proposed centre. The Roman boat will be the subject of a lecture to the Southwark & Lambeth Archaeological Society in February 2013.