"If you want a day out, a night out, fun in the 1590s, the place you come to is Southwark," said British Museum director Neil MacGregor when speaking about the Elizabethan years. 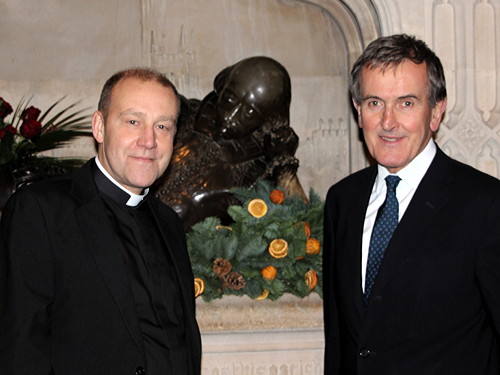 The museum director was addressing a packed audience in Southwark Cathedral on Monday evening. Several hundred people had come to hear him talk about his book Shakespeare's Restless World.

Dean of Southwark the Very Revd Andrew Nunn, introducing the guest, said that the cathedral had "a most wonderful Shakespeare memorial". Edmund Shakespeare, Massinger and Fletcher were buried between the choir stalls.

"This was the parish church in that period for the Globe theatre. Shakespeare would have known this place."

Turning to the Elizabethan Southwark he added: "This is where you come for every kind of pleasure: food, fighting, sex and theatre."

Illustrations from the book projected on a large screen included a 1619 watercolour depicting a ferry and the cathedral's tower, Hollar's view from the same tower and a money box used to collect pennies from groundlings at the Rose and Globe theatres.

Music before and after the talk was provided by the Fellowshippe of Musicers.