Relics of St John Bosco, founder of the Salesian order, have arrived in Southwark for a 24 hour visit. 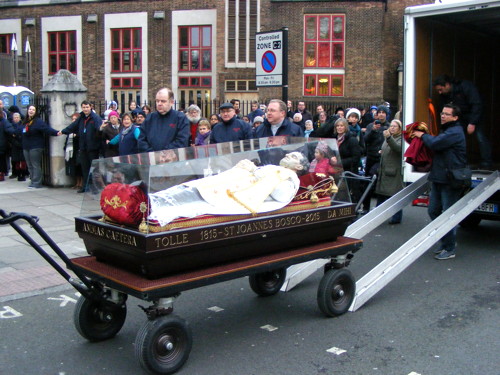 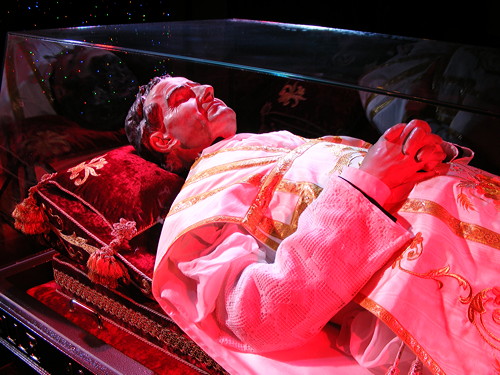 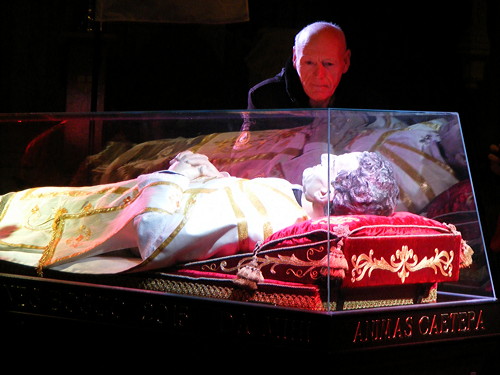 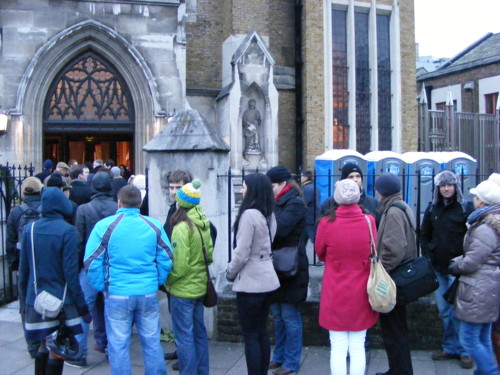 The full size effigy of the saint, containing the relics, was received at St George's Roman Catholic Cathedral on Sunday afternoon.

Canon John O’Toole, dean of St George's, was present at the west door with a huge crowd of people to witness the relics' arrival.

St John Bosco's body is in the Mary Help of Christians basilica in Turin. In 2009 the bones and tissues of Don Bosco’s right hand and arm were removed and placed in a replica of the saint's body.

Don Bosco, born into a poor family in Italy in 1815, chose an an adult to live in poverty with his mother in Turin whilst running a home for destitute boys. He opened workshops to provide training for trades.

The patron saint of young people set out an educational philosophy which favoured friendly guidance over punishment.

Appropriately, his relics travelled to Southwark by way of Feltham Young Offenders Institution where on Sunday morning two Masses were celebrated with young teenage offenders.

Among those at St George's Cathedral was Sister Cecily Dunn, director of the Bosco Centre on Jamaica Road which runs programmes including employment training for teenagers.

"It's the whole reviving of the spirit and the whole charism of John Bosco which is charism for young people and the young at heart," commented Sister Cecily when asked what the visit meant to her. "It's the idea that life is good and we are good and we are very loved."

She added" "It's not all doom and gloom. Bad things happen but getting close to God can be fun and it can be about being together and sharing and celebrating. It's not all about hell and damnation. It's anything but. It's about joy and gladness."

Archbishop of Southwark Peter Smith celebrated Mass for pilgrims on Sunday evening. Salesian schools from across southern England are due to attend a Mass at 12.30 on Monday.

The tour is part of preparation for the bicentenary of St John Bosco's birth in August 2015. He died in Turin in 1888 when his funeral was attended by 40,000 people.

Don Bosco, who used magic tricks in his educational activities, is also regarded as the patron saint of illusionists and conjurors.

The casket has already visited 22 countries in North and South America including Cuba. Last year it visited six African countries.

The relics were in Spain before arriving in Scotland earlier this month.

On Monday people will be able to visit the St John Bosco relics and Pilgrim Experience in Southwark's St George's Cathedral from 8am to noon and again from 2pm to 4pm.