Bermondsey and Old Southwark MP Simon Hughes has written to Southwark Council to complain about what he describes as the "very unsafe" state of many pavements and footpaths since the recent snowfall. 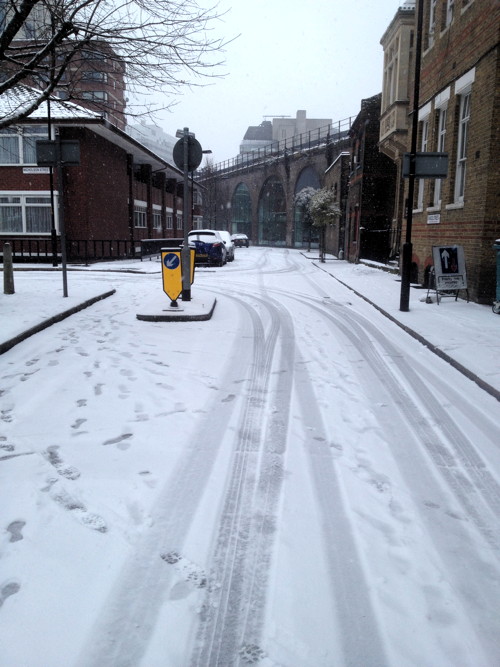 A snow-covered Chancel Street on Sunday

The Liberal Democrat MP has written to Deborah Collins, Southwark Council's director of environment and leisure, to raise his concerns.

"The state of many of the pavements in the borough since the last snow fell is frankly appalling," said Simon Hughes on Tuesday.

"Some of the most important public rights of way are iced over and very unsafe for people travelling to work or to school.

"I have also been shocked to hear that many estates have not been gritted at all, leaving residents, many of whom are elderly and vulnerable, at risk of serious injury.

"It is really worrying that, after two years of claiming to get the basics right, Southwark Council are now failing to deliver the essential services local residents have a right to expect."

Southwark Council said on Monday that its highways team had been gritting priority roads to keep traffic flowing and had also treated access routes to housing estates that have been identified as being particularly icy.

The authority said that its staff had also been gritting pathways around sheltered housing schemes, health centres, parks, transport hubs and other key facilities.

All 184 grit bins across the borough were due to be replenished on Monday.

"Council staff have been working hard over the weekend, and will continue throughout the week to make sure services keep running as smoothly as possible during these terrible weather conditions," said Cllr Barrie Hargrove, Labour cabinet member for transport, environment and recycling.

"Staff have also been keeping in contact with vulnerable residents around the borough to offer help and support, including in the sheltered housing service where four tenants reported they were out of bread and milk so officers called round with extra supplies."

Cllr Catherine McDonald, cabinet member for health and adult social care, said: "Snow, ice and lowering temperatures can have a real impact on older or vulnerable residents, either because they are afraid to turn up their heating because of soaring bills or because it makes it harder for them to get out and about.

"It may only take a couple of hours to call in on a family member, friend or neighbour and check that they are well and warm."