Shakespeare's Globe, the National Theatre and Southbank Sinfonia are among the cultural institutions which this week signed a letter of intent to collaborate on a series of events in 2016 to mark the 400th anniversary of William Shakespeare's death. 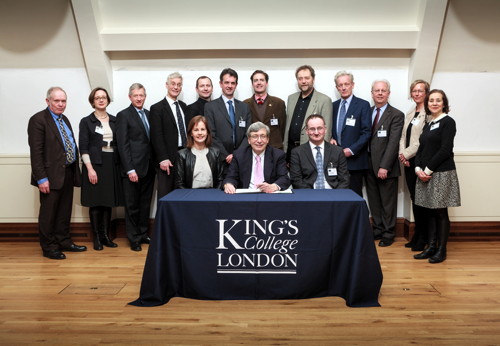 Wednesday night's ceremony at King's College London marked the launch of of the Shakespeare400 season which will run from April to September 2016.

"We are delighted to be working with world-class cultural partners to celebrate the profound impact of 400 years of Shakespeare," said Professor Gordon McMullan of the London Shakespeare Centre.

"In 1916, King's, through the work of Professor Sir Israel Gollancz, led the way for the tercentenary celebrations, out of which emerged the National Theatre; and the College looks forward to again facilitating a London season with worldwide impact for 2016."

Deborah Bull, executive director of the King's Cultural Institute, added: "I'm delighted that so many significant partners – some longstanding and some new to King's – have committed to working with us to ensure that Shakespeare's quatercentenary is marked appropriately – for as wide an audience as possible and in a way that doesn't only commemorate the past, but that also celebrates the present and heralds the future."