Bermondsey-based fashion designer Zandra Rhodes is to be the 'breast cancer ambassador' for London, Boris Johnson announced on Tuesday. 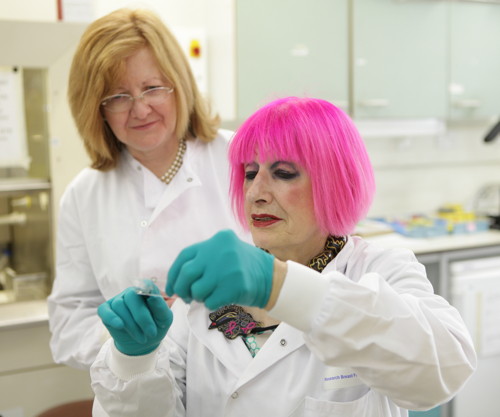 Zandra, who sells her dramatic and colourful designs around the world, is also a long-standing supporter of research charity Breast Cancer Campaign.

In her new role she will help the Mayor of London Boris Johnson raise awareness of the disease. Over 4,600 women in the capital are diagnosed with breast cancer each year and they want to encourage women to regularly check for any changes to their breast and to seek advice if they see anything unusual or have any concerns. They will also promote London as a leading centre for research into breast cancer and its treatment.

The Mayor of London Boris Johnson said: "I am delighted that Zandra Rhodes has agreed to become London breast cancer ambassador.

"It is a disease that affects thousands of women across the capital, as well as having a devastating impact on their loved ones.

"We want to help remove the fear factor for women across the capital. Early detection is vitally important and we are urging women to get to look out for signs and symptoms and to seek advice if they have any concerns. Research into causes and treatments is advancing.

"We will also be promoting London as a centre for this work and will lobby for investment to ensure that the capital remains at the forefront of the life sciences."

Zandra Rhodes said: "Breast cancer is a devastating disease and I am pleased to accept the role of breast cancer ambassador, to help raise awareness both of the disease and how we can overcome it through investment in research."

During her tour of Guy's Hospital Zandra Rhodes visited a King's College London research laboratory which is investigating genetic variations in thousands of tissue samples that may increase the risk of developing non-invasive forms of breast cancer such as DCIS (ductal carcinoma in situ) and LCIS (lobular carcinoma in situ).

The research, led by Dr Elinor Sawyer, is funded by Breast Cancer Campaign.

The new King's Health Partners cancer centre is currently under construction at Guy's Hospital and is due to open in 2016.

• It is 10 years since Zandra Rhodes opened the Fashion & Textile Museum in Bermondsey Street and a major retrospective exhibition of her work opens this week.