The blank brick 1970s facade of the Greenwood Theatre will be brightened up this summer thanks to a collaboration between fashion designer Zandra Rhodes and TV presenter Joe Swift. 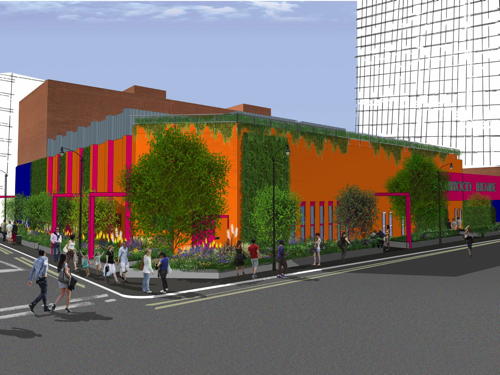 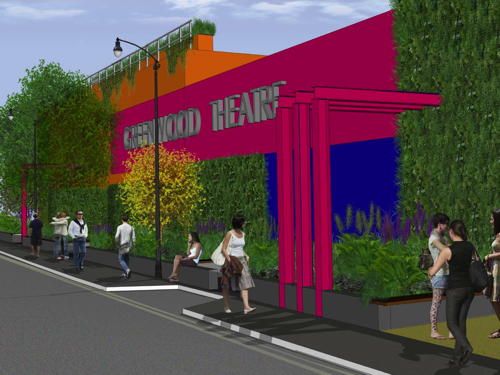 Project organisers Team London Bridge and Cityscapes have joined forces with King’s College London, Network Rail and the Mayor of London’s Pocket Parks Programme to transform the corner of Snowsfields and Weston Street.

With the support of Southwark Council, Joe and Zandra will work alongside Cityscapes to make it a centrepiece of their 2014 landscape design festival.

"Once, one could only go to the London Dungeon and look down the lonely railway tunnels to Sweeney Todd land.

"Then I persuaded Ricardo Legorreta to design the Fashion & Textile Museum which many regard as the initial starting point of the regeneration.

"Since then has come The Shard and the total rebuilding of London Bridge station. The area is thriving and exciting.

"With many people moving into here to live and many more walking through to the restaurants and station, it is essential to both green and liven-up all the ‘dead’ areas so that it becomes a pleasure to pass through, regardless of the weather.

"The Greenwood Theatre has been a large brick eyesore for many years, so when I was approached to work with Joe and enliven this space I jumped at the chance!

"I felt we needed colour to spread 'sunshine' into the area, and the plants to make it a fabulous place to sit and linger in. It really is a lovely exciting project."

Joe Swift said: "We are embracing the London microclimate to grow an eclectic and varied mix of plants including some exotics to provide plenty of all year round interest, colour and scent.

"The aim is to give the Greenwood Theatre and surrounding area horticultural depth and a strong identity to stimulate those who use it and pass by."

• A public meeting will be held in March to discuss plans with the local community.