Paintings by Walworth-based artist Dale Inglis have been on show at the National Theatre since late May as part of a collaboration with the Waterloo Festival. 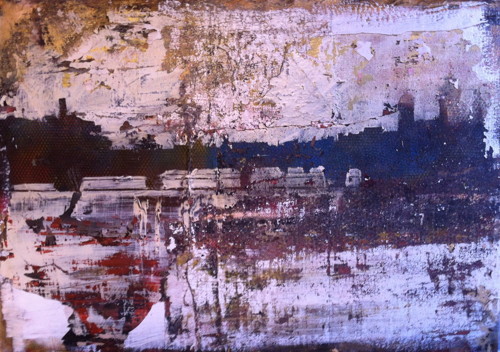 Dale Inglis was born in Canada in 1946. He attended art school in Canada and London, moving with his family to Britain in 1979. He has worked as a painter, muralist and teacher. He works at Pullens Yards in Walworth and in Sussex, where he lives with his wife Janet.

One of his chief interests has been the study and depiction of the River Thames and we asked him what sparked that area of his work.

"It came about originally a long time ago, when I first came to London, and I found myself with a studio that overlooked the Thames," he said.

"I was there for a while, and I started painting what was outside the window, and then I extended my range up and down that particular section of the Thames.

"At that time, it was all, mostly, decaying warehouses and much of it was corrugated iron and that sort of thing.

"I spent a lot of time drawing and painting along the river, and then I revisited the subject a few years ago.

"Although I don't have a studio overlooking the Thames now, I have frequent occasions to cross the Thames, almost every day at London Bridge and Charing Cross.

"It's been – I can't say a lifelong acquaintance – but certainly 30 years or more of watching the river, and crossing it, and walking up and down on both sides, and thinking, and photographing it.

Inglis uses some unusual techniques to produce his oil paintings: "Some of them have collage elements which are painted over. In some cases I use varnishes which become incorporated into the surface of the paintings.

"Some of the procedures I'm using are fairly unorthodox. I've been doing quite a lot of experimenting with using paint-stripper, or a heat gun, or a blowtorch on the surfaces of paintings, so the surface of some of them show the residue, I suppose, of relatively forthright activity. It's not all done with brushes."

Inglis's depictions of the Thames have a timeless quality despite the three decades of change he has witnessed.

"In some cases, I've ignored the changes. For instance, I'm working on a group of paintings at the moment that are around Charing Cross, and I've left out the London Eye. I've done others where I've left some recent developments out of paintings, so they're not actually meant to be snapshots of the river at a given moment, or even a given period.

"I'm not trying to show the river as it is, but rather more generalised and, I hope, timeless. They're reasonably accurate in terms of topography. That's not really my main interest."

"Some of the changes are quite exciting. I have quite a few paintings of the area that now include the Shard. I have yet come to terms with the presence of the Shard, which is such an extraordinary building, and on such an extraordinary scale, that it would be difficult to accommodate in the work that I've been doing. But I will have to, at some stage, address that.

"Most of the changes that have happened, over the years that I've been paying attention to them, have been extremely positive and quite exciting, the Shard being one of them. The whole development at London Bridge is quite astonishing.

"There are a few fairly crass architectural interventions as you go downstream. If you look at old photographs, even up until the 60s and 70s, the buildings are all low-rise, of course.

"There's a three-dimensional quality, that you can see buildings off into the distance, you can see church spires.

"Whereas now, the new buildings are all sort of flats going up to the riverfront, and there's no depth at all. You just get the flat front of the building. It makes a lot of the river much less appealing visually, and I'm not sure about sociologically.

"I still can say that the character of the river is pretty much unchanged, besides some dramatic developments, certainly in the part of the Thames through central London."

"And then I'll be having another exhibition in St John's Waterloo, at the end of the year's residency. I that will be work that I've already begun, but it's centred around Waterloo Bridge, you could say.

"I've been looking at the Thames in both directions, towards Charing Cross and towards the City.

"I've effectively moved my centre of gravity upstream by about a mile."

• The River: Paintings by Dale Inglis has been extended until Sunday 11 August.