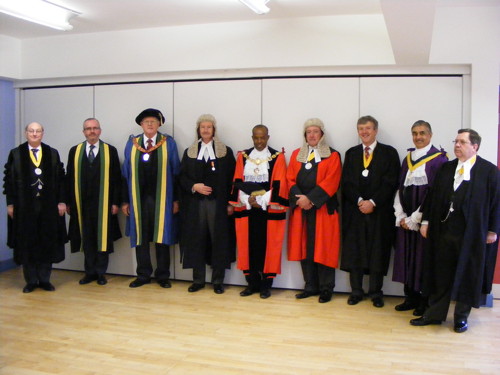 With a simple "I do" Judge Roger Chapple acknowledged the Recorder's Oath, to maintain impartiality "and not take fees from anyone except from the Queen's Treasury", read by the jurors' clerk.

His Honour Judge Roger Chapple, senior resident judge at Inner London Crown Court in Newington Causeway, was appointed to be the first Recorder of Southwark by Southwark Council in November 2011. At his installation in May 2012 in St George's Cathedral next to the Amigo Hall, the Recorder said that he was conscious of a lack of positive community ties between his court and the borough and people of Southwark.

The court sitting opened with the Common Cryer 'informing' the jurors of the assembly. Among the jurors were Southwark freeman and historian Stephen Humphrey, former mayor Cllr Althea Smith and councillors Norma Gibbes and Ian Wingfield.

The Recorder's charge took the form of an address by Old Bailey judge Timothy Pontius who for twelve years sat at Blackfriars Crown Court.

The Southwark Recorder's Court is expected to have annual sittings with councillors and freemen present as jurors. This year's sitting was followed by a lunch.