London Assembly member Stephen Knight this month worked alongside catering apprentices at the Brigade restaurant in Tooley Street to mark the launch of a new investigation into apprenticeships in London. 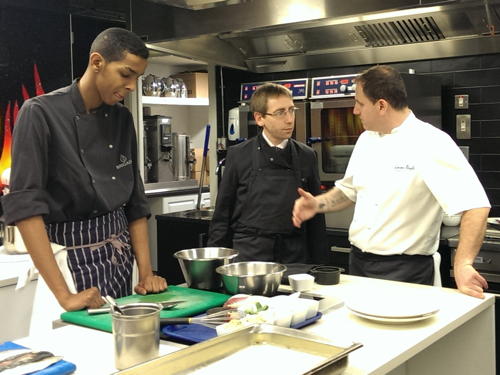 Brigade, which opened in 2011, is a joint venture between, the Beyond Food Foundation and De Vere Venues.

It is part of a social enterprise centre created by PwC whose offices are next door.

High profile visitors to the centre have included prime minister David Cameron and the Duke of York.

Earlier this month Liberal Democrat Stephen Knight AM, chair of the London Assembly's cross-party economy committee, talked to apprentices at the social enterprise restaurant to learn first-hand what they can offer London's workforce.

The City Hall committee has launched an examination of how apprenticeships are developed and managed, and what value they can bring to the capital's workers and economy.

As part of the investigation, committee members are keen to hear from apprentices across London.

Stephen Knight AM said: "Apprenticeships can bring real value to employees and employers, yet there are fewer on offer in the capital than elsewhere in the UK.

"London has a huge pool of talent and potential with its large and diverse population. We need to make sure this is not going to waste and people are being trained in skills our economy needs.

"We will look at whether the Mayor and others could do more to bring numbers up closer to the UK average. We also want to know if the apprenticeship schemes on offer in London are effective in supporting people into work and what impact the planned Government changes could have."

Simon Boyle, founder of Beyond Food and Brigade, said: "During my time as a professional chef, I have worked with some talented apprentices who before given the chance would not have gone on to retain employment due to lack of experience or confidence.

"Across London there are many apprenticeship programmes and we welcome the London Assembly's investigation so more support can be offered to people who are looking for a fresh start."

To provide comments on experience as an apprentice or about an apprenticeship scheme, contact the London Assembly economy committee at [email protected]